Review: "Bruce Almighty" Not So Mighty 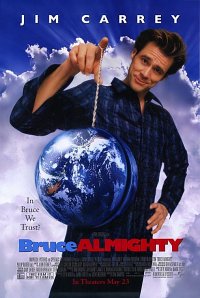 The subject of this movie review is Bruce Almighty, a 2003 comedy and fantasy film from director Tom Shadyac and starring Jim Carrey. The film was a worldwide box office hit and yielded a spin-off film, Evan Almighty, in 2007.

Bruce Almighty isn’t Jim Carrey’s best film, although it was one of his biggest ever at the box office. I wanted to see it for a long time, but never got around to it, and after having finally seen it, I now realize that it would have been perfectly fine, if in my life as a moviegoer, I had never seen it. It’s not bad; it’s just not good Jim Carrey.

Bruce Almighty focuses on Bruce Nolan (Jim Carrey) an unhappy television reporter who complains about how unfair God is to him. When he doesn’t get the promotion after which he lusted and gets himself fired as a result, he condemns God as a do-nothing. God (Morgan Freeman) decides to make an appearance and see if Bruce can do better a job ruling existence. He gives Bruce his almighty powers just to teach him how difficult the job of being God can be.

First of all the concept is a piece of shit. Granted that the job of watching the universe is, to say the absolute least, difficult, can’t God do the job? He is, after all, God…

Secondly, the script is very smart, for at least half the film. Bruce acts just as you’d think he would – selfishly and carelessly doing whatever it takes to make things easy for him. It turns out he was always a self-obsessed bastard. Even after he gets his way via his newly gained almighty powers, he doesn’t think to make things better not only for himself, but also for his girlfriend, Grace Connelly (Jennifer Anniston). When Bruce does finally at least pay attention to the (presumed) basic duty of God, answering prayers, he takes the easy route and creates a disaster. All this stuff is smart and probably pretty accurate when it comes to describing how someone would handle the situation.

After that, Bruce Almighty becomes a feel good fest of fixing things and doing the right thing. That makes for a pleasant movie, and the story resolves in the way it probably should: life lessons learned, good will towards men, respecting God (but, according to the film, respecting God in a bland and non-evangelical way). However, that’s the problem. Bruce Almighty plays it too safe; it would have really been a funnier film if it had actually went against the grain – maybe be radical.

And as silly and crazy as Jim Carrey has been, he’s rarely done anything dangerous in his career. As a stage comedian, he was a gagman, the Prince of Ass Jokes, really. He does great impersonations and he’s a human sound effects machine, but we’re not talking Lenny Bruce or even Carrey’s idol, Andy Kaufman. His film career has pretty much been the same act, but he’s been so damn good at it. The Ace Ventura films and Dumb and Dumber are priceless.

Since the mid to late 90’s, Jim has been trying to prove to everyone that he’s not a comedian turned actor or just a comic actor, but an actor – one capable doing serious dramatic roles. I think several years of trying to prove that he’s a great actor has dulled the talent that justifies his popularity and humongous paychecks – his talent as the Prince of Ass Jokes, the Duke of Juvenile Humor, and Lord of Rubbery Faces.

You can see it in Bruce Almighty. His silliness, childishness, and zaniness lack the zip they once had. He’s does some really hilarious clowning around in this film, but a lot of it is soft and too much of it strained.

So see Bruce Almighty, if you like Jim Carrey. Sadly, it’s the closest we’ll get to the early to mid-90’s pet detective.