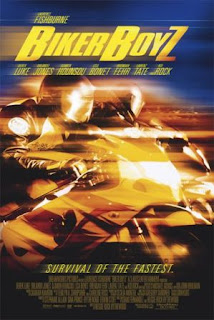 ACTION/DRAMA with elements of crime

The subject of this movie review is Biker Boyz, a 2003 drama and action movie. The film focuses on underground motor cycle drag racers and was released by DreamWorks Studios.

First, I’ll mention what’s good about the movie. Director Reggie Rock Blythewood uses a lot of really interesting, unique, and visually jarring camera angles and shots. To watch the opening credits is an invigorating experience; it was so cool that I expected even greater things later in the film. Blythewood uses still photography and quick-cut editing to raise the level of excitement and tension in the film, and on many occasions it works…for awhile.

Laurence Fishburne is Smoke, the "King of Cali," a legendary motorcycle racer in California. The Kid (Derek Luke), a former member in training of Smoke’s gang, The Black Knights, wants Smoke’s mythical crown, his racing helmet. Smoke would have to surrender it if he ever lost a face, and he hasn’t in over 25 races. However, bike racing, among the mostly African American bike clubs is hierarchical, a governing board has to vote to let Kid play; he has to earn the right to tackle Smoke. Kid forms a club of his own, The Biker Boyz, and sets about throwing his weight around to get his way. But does the older Smoke, whom Kid views as an enemy, have something to teach the brash, young biker?

Just this last line tells you that what could have been a good racing movie turns into a mush fest. That’s just the tip of the bad. The story of the young up-and-comer challenging a revered leader is familiar, and, when done correctly, can make for an entertaining story. However, as good as Blythewood is with camera work and quick cuts, his sense of storytelling is abominable. Things develop so slowly that the film actually seems to grow longer as it progresses. The problems stem from the relationships between the characters. Every time the film stops to give two characters a chance to connect with each other, the film literally grinds to a halt; you can almost hear the film’s gears crunching and dragging. It becomes deliriously dull, and I mean that it gets so dull that it made me delirious. I was going to walk out, but to be fair, I wanted to see the entire film so that I could properly review it for you, dear reader. Never say that I don’t care for you.

Late in the film, Kid and his mother, Anita (Vanessa Bell Calloway), meet to make up, and the movie stops cold. I was ready for her to just make her apologies and get the heck out of Kid’s apartment so that he could go race. Ms. Calloway’s character had potential, but like all the others, she’s wasted by Blythewood’s inability to tell a story through his characters. As long as he can do tricks with his camera, he’s fine, but the moment people stop to relate to one another, Blythewood is struck dumb.

Biker Boyz has lots of supporting characters, and the actors playing them (Kid Rock, Orlando Jones, Djimon Hounsou, Lisa Bonet, Tyson Beckford) might interest moviegoers. But they would be shocked how listless and dull their favorites are in this surprisingly poor film.

Posted by Leroy Douresseaux at 7:31 AM