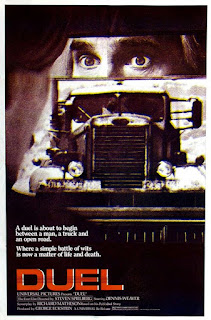 Duel is a 1971 action-thriller and television film directed by Steven Spielberg.  The film is based on the short story, “Duel,” which was first published in the April 1971 issue of Playboy Magazine.  It was written by Richard Matheson, who also wrote this film's teleplay (screenplay).  Duel the movie focuses on a business commuter pursued and terrorized by a driver in a massive tanker truck.

Duel was originally a “Movie of the Week” that was broadcast on ABC November 20, 1971.  Duel was the first film directed by Steven Spielberg, and it is considered to be the film that marked young Spielberg as an up and coming film director.  Following its successful air on television, Universal had Spielberg shoot new scenes for Duel in order to extend it from its original length of 74 minutes for TV to 90 minutes for a theatrical release.  This extended version of Duel was released to theaters internationally and also received a limited release in the United States.  The theatrical version is the subject of this review.

Duel focuses on David Mann (Dennis Weaver), a middle-aged salesman.  One morning, he leaves his suburban home to drive across California on a business trip.  Along the way, he encounters a dilapidated tanker truck that is driving too slow for David.  He drives his car past the tanker, but a short while later, the tanker speeds up and roars past David's car.  After David passes the tanker again, the truck driver blasts his horn.  That sets off a cat and mouse game in which the tanker's seemingly malevolent driver pursues David's car and terrorizes him.  And nothing David does can help him to escape the pursuit.

I think that the mark of a great film director is his or her ability to get the most out of his or her cast and creatives and a maximum effort from the film crew.  Duel is a display of excellent work on the stunt performers and drivers.  Together with the camera crew, sound technicians, and film editor, they deliver a small screen film that offers a big cinematic duel between a small car and relentless tanker truck.

Dennis Weaver delivers a performance in multiple layers as David Mann.  Weaver makes Mann seem like a real businessman type, a cog-in-the-machine and ordinary fellow just trying to make it in the world.  Weaver does not seem to be acting so much as he is living and fighting for survival.

Behind all this is the young maestro, Steven Spielberg.  It is not often that TV movies get the cinematic treatment, but I imagine that the original production company, Universal Television, was quite pleased when they first saw this film.  It is genuinely thrilling and unsettling, and the truck driver (played by stuntman Carey Loftin), who is unseen except for his forearm and waving hand and his jeans and cowboy boots, can unnerve like the best horror film slasher killers.  The way that dilapidated tanker truck moves makes me think that it was a precursor to the shark in Jaws, which would become Spielberg's first blockbuster theatrical film just a few years (1975) after the release of Duel.

Richard Matheson's script for the film seems to want to make the viewer really wonder about the driver.  Is he evil... or a maniac... or demented prankster?  Why does he focus on David Mann?  Has he done this before?  What is his endgame with David?  Does he want to kill him or just punish him.  Does he want to torment David before he crushes him and his car beneath his tanker truck's wheels?

Steven Spielberg brings those questions to fearsome life on the small screen and later big screen.  He makes Duel work both by scaring us and David with the big bad truck and by fascinating us with all these questions concerning the trucker's motivations and David's fate.  Hindsight is just as accurate as foresight in the case of Duel.  Steven Spielberg was great, practically from the beginning.