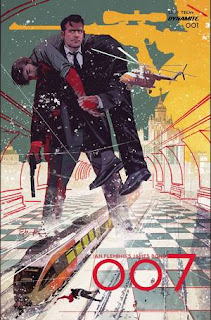 Over the past 50+ years, Bond has made sporadic appearances in comic books, but Dynamite Entertainment has been steadily publishing James Bond comic books since early 2016.  Their latest James Bond comic book is James Bond: OO7.  It is written by Phillip Kennedy Johnson; drawn by Marco Finnegan; colored by Dearbhla Kelly; and lettered by Jeff Eckleberry.  The new series finds OO7 on a most personal mission to uncover the killers of a fellow OO agent and to unravel a conspiracy that threatens England and the balance of power in the world.

James Bond: OO7 #1 opens in Moscow.  OO7 is back in action and on a high-stakes rescue mission to exfiltrate Fedor Nikolaev, a Russian intelligence asset in possession of some game change information.  After the mission is mysteriously and violently sabotaged, however, Bond is blamed, and his future at MI6 hangs in the balance.

As he awaits his fate, Bond is urgently contacted by an old flame and mentor: Gwendolyn Gann, formerly Agent OO3.  She wants to meet with him, and though Bond is suspicious, he has no idea just how dangerous his line of work has become.

THE LOWDOWN:  Since July 2021, Dynamite Entertainment's marketing department has been providing me with PDF review copies of some of their titles.  One of them is James Bond: OO7 #1, which is one of several Dynamite James Bond comic books I've read.

In the wake of writer Rodney Barnes' excellent James Bond: Himeros, I was hoping that another exciting Bond comic book miniseries would be soon coming my way.  Writer Phillip Kennedy Johnson delivers a humdinger of a first issue with James Bond: OO7 #1.  It is so explosive, from the beginning, and I hated to have to summarize any of it.  Dear readers, I want you to get the full explode-in-your-face experience in reading this debut issue.

If I have to compare this comic's Bond to a cinematic Bond, I would go with a blend of Pierce Brosnan's world-weary slickness and Daniel Craig's errand boy/thug.  Kennedy puts Bond's life on the line and also his existence because he is being forced to recognize a changing espionage game.

The first issue of James Bond: OO7 is good enough to make me confident enough to highly recommend reading the entire series.

Posted by Leroy Douresseaux at 3:49 AM