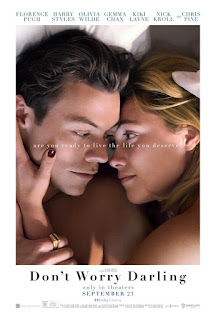 New Line Cinema’s and Filmmaker Olivia Wilde’s “Don’t Worry Darling” to World Premiere at the 79th Venice International Film Festival
BURBANK, Calif.--(BUSINESS WIRE)--New Line Cinema’s “Don’t Worry Darling,” the highly anticipated second feature from director Olivia Wilde, is set to make its out-of-competition world premiere at the 79th Venice International Film Festival of La Biennale di Venezia, running from August 31st to September 10th, 2022. The announcement was made today by Alberto Barbera, Director of the 79th Venice International Film Festival of La Biennale di Venezia.
In tandem with the announcement, Wilde—who will attend the Festival, along with co-stars Florence Pugh, Harry Styles, Gemma Chan and Chris Pine—stated, “I am honored and thrilled that ‘Don’t Worry Darling’ will have its world premiere at the Venice Film Festival. When we dreamed of making this movie, we imagined Venice as our ultimate goal, and we can hardly believe it’s really happening! From our cast —led by the formidable Florence Pugh and Harry Styles—to the design of this world and the kinetic cinematography, the film was crafted for viewing in the collective setting of the theatrical experience. For this first screening to take place in the jewel-like surroundings of the Venice Lido and in the presence of some of international cinema’s most accomplished artists is beyond exciting. I look forward to sharing the visceral ride of ‘Don’t Worry Darling’ with the world, beginning with the Venice Film Festival, and I wish to thank Alberto Barbera and the Biennale for the selection. This is truly a dream come true.”
The Venice International Film Festival is officially recognized by the FIAPF (International Federation of Film Producers Association). The aim of the Festival is to raise awareness and promote international cinema in all its forms as art, entertainment and as an industry, in a spirit of freedom and dialogue. The Festival also organizes retrospectives and tributes to major figures as a contribution towards a better understanding of the history of cinema.
From New Line Cinema comes “Don’t Worry Darling,” directed by Olivia Wilde (“Booksmart”) and starring Florence Pugh (Oscar-nominated for “Little Women”), Harry Styles (“Dunkirk”), Wilde (upcoming “Babylon”), Gemma Chan (“Crazy Rich Asians”), KiKi Layne (“The Old Guard”) and Chris Pine (“All the Old Knives”).
Alice (Pugh) and Jack (Styles) are lucky to be living in the idealized community of Victory, the experimental company town housing the men who work for the top-secret Victory Project and their families. The 1950’s societal optimism espoused by their CEO, Frank (Pine)—equal parts corporate visionary and motivational life coach—anchors every aspect of daily life in the tight-knit desert utopia.
While the husbands spend every day inside the Victory Project Headquarters, working on the “development of progressive materials,” their wives—including Frank’s elegant partner, Shelley (Chan)—get to spend their time enjoying the beauty, luxury and debauchery of their community. Life is perfect, with every resident’s needs met by the company. All they ask in return is discretion and unquestioning commitment to the Victory cause.
But when cracks in their idyllic life begin to appear, exposing flashes of something much more sinister lurking beneath the attractive façade, Alice can’t help questioning exactly what they’re doing in Victory, and why. Just how much is Alice willing to lose to expose what’s really going on in this paradise?
An audacious, twisted and visually stunning psychological thriller, “Don’t Worry Darling” is a powerhouse feature from director Olivia Wilde that boasts bold performances from Florence Pugh and Harry Styles, surrounded by the impressive and pitch-perfect cast.
The film also stars Nick Kroll (“How It Ends”), Sydney Chandler (“Pistol”), Kate Berlant (“Once Upon a Time… In Hollywood”), Asif Ali (“WandaVision”), Douglas Smith (“Big Little Lies”), Timothy Simons (“Veep”) and Ari’el Stachel (“Respect the Jux”).
Wilde directs from a screenplay penned by her “Booksmart” writer Katie Silberman, based on a story by Carey Van Dyke & Shane Van Dyke (“Chernobyl Diaries”) and Silberman. The film is produced by Wilde, Silberman, Miri Yoon and Roy Lee, with Richard Brener, Celia Khong, Alex G. Scott, Catherine Hardwicke, Carey Van Dyke and Shane Van Dyke executive producing.
Wilde is joined behind the camera by two-time Oscar-nominated director of photography Matthew Libatique (“A Star Is Born,” “Black Swan”), production designer Katie Byron (“Booksmart”), editor Affonso Gonçalves (“The Lost Daughter”), Oscar-nominated composer John Powell (“Jason Bourne”), music supervisor Randall Poster (“No Time to Die”) and costume designer Arianne Phillips (“Once Upon a Time… In Hollywood”).
A New Line Cinema presentation, “Don’t Worry Darling” will be distributed worldwide by Warner Bros. Pictures and is set to open in theaters internationally beginning September 21, 2022 and in North America on September 23, 2022.
--------------------
Posted by Leroy Douresseaux at 2:56 PM