Comics Review: "PRODIGY: The Icarus Society #2" - How to Make a Killer Second Issue 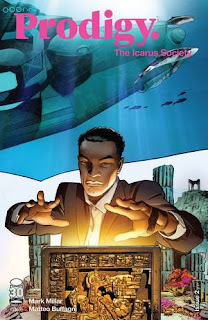 Prodigy: The Icarus Society is a new five-issue comic book miniseries produced by writer Mark Millar and artist Matteo Buffagni.  It is a sequel to the 2018-19 six-issue miniseries, Prodigy.  The Prodigy comic books focus on the adventures of the world's smartest man, Edison Crane, who believes that he is the go-to guy when there is a global crisis to solve.  Letterer Clem Robins and colorist Laura Martin complete the sequel's creative team.

Prodigy: The Icarus Society #2 opens in the prison, the Maine Correctional Facility.  Professor Tong of the Icarus Society has forced Edison to free him from his imprisonment there.  Tong has had an explosive device placed inside Edison's stomach and now, he will force our hero to play a game of cat-and-mouse with one his Icarus rivals, Felix Koffka.  Must Edison, like the members of this secret society, fly too close to the sun.

THE LOWDOWN:  Of Mark Millar's recent Netflix comic book series, I am a huge fan of The Magic Order, but I am always thinking about Prodigy.  After reading the first series, Prodigy, I was intrigued and thrilled, and after re-reading it in trade paperback form, as Prodigy: The Evil Earth, I admired it all the more.  Edison Crane is another great Mark Millar creation.

Millar has been producing some of the best comic books in North America for the better part of three decades.  Even after becoming an executive with one of the most powerful media companies in the world (Netflix, of course), he continues to produce great comic books.  Let's be honest, most comic book creators rest on their laurels when they hit the jackpot, and if and when they do produce new comic books, they are sometimes disappointing works.  This is not the case with Millar, who delivers a monster of a second issue for this new series.

Millar used Prodigy: The Icarus Society #1 to introduce readers to Edison Crane's state of mind (more or less) and to his new challenge.  With issue #2, Millar quickly reveals that this sequel will be as intense, if not more so, than the original.  The mythologies, the conspiracies and the occult flourishes are even more delectable, and the villains … well, they are great f*****g villains.

The art team of illustrator Matteo Buffagni and colorist Laura Martin also threaten to fly too close to the sun.  Matteo's art recalls the “widescreen” storytelling of DC Comics' late, great The Authority (one of the treasures of Millar's bibliography).  Matteo makes The Icarus Society #2 feel like a Marvel Studios movie, full of big ideas and big expectations.  Laura Martin's colors establish a series of rich and varied moods and atmospheres that draw the reader inside this perilous new world that Edison Crane faces.

More excellent lettering from the perpetually excellent Clem Robins tops it all off, and there you have it.  Prodigy: The Icarus Society #2 washes over my imagination with a giant wave of intrigue and now, we can all be assured that this series will be fantastic.