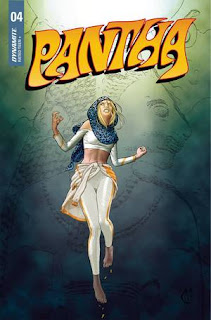 A Dynamite Entertainment, Pantha first appeared in Vampirella #30 (cover date: January 1974).  She is an ancient Egyptian queen who was cursed by the goddess of war and rage, Sekhmet, because of the murders she committed.  Pantha must walk the world forever, trapped between the forms of human and panther.  She will never know home or peace, burdened by the fury of a goddess and the rage of the innocents she ordered slain.

Pantha, like Vampirella, is now belongs to Dynamite Entertainment, which gave the character her own six-issue miniseries in 2012.  Pantha returns in a new comic book series, entitled Pantha Volume 2.  It is written by Thomas Sniegoski and Jeannine Acheson; drawn by Igor Lima and Daniel Maine; colored by Adriano Augusto; and lettered by Dezi Sienty, Carlos  M. Mangual, and Taylor Esposito.  In this new series, Pantha/Maatkar Samira must save the Egyptian pantheon from a mysterious adversary that is older than the gods and wants the gods' power.

Pantha Volume 2 #4 (“Oh, Woe is Us!”) opens in Cairo, Egypt – the present day.  There, the primordial god, Atum, lives as the humble artisan, Ahmed.  Now, one of his oldest creations has come calling for him.

Meanwhile, Pantha and Nick have escaped to the safe house of “The Mortalists,” a place known as “The House of Woe.”  Injured, Pantha needs some medical attention, and she will get it here.  However, their host at the House of Woe, Ba-Pef, is living foul.  Is he the traitor in their midst?  Is he one of their own, someone who will use their greatest fears against them as they prepare to face the so-called god-eater, Ta-Nakht.

THE LOWDOWN:  Since July 2021, Dynamite Entertainment's marketing department has been providing me with PDF review copies of some of their titles.  One of them is Pantha Volume 2 #4, which is only the fourth Pantha comic book that I have read.

With Pantha Volume 2, writers Thomas Sniegoski and Jeannine Acheson are killing it.  Have I said that before?  If I have, that is because it is true.  Pantha is a wonderful dark fantasy-thriller full of eccentric heroes and monstrous adversaries.

Artists Daniel Maine and Igor Lima give Pantha #4 a look that reminds me of Neil Gaiman's beloved comic book series, The Sandman.  It featured many wonderful artists creating a world of shifting shadows.  Here, Maine makes the action expand the scope of the darkness.

I'll repeat what I said in my reviews of the first three issues.  Don't walk.  Don't run.  Drive like a maniac (without causing an automobile accident) to your local comic shop and get Pantha Volume 2 #4.

Posted by Leroy Douresseaux at 2:59 PM