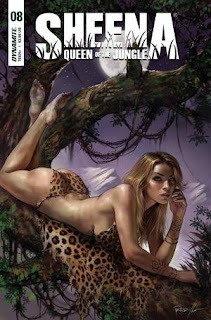 Dynamite began publishing Sheena comics in 2017.  Dynamite's second series is Sheena: Queen of the Jungle, Volume 2.  It is written by Steven E. de Souza; drawn by Jethro Morales and Wil Rio; colored by Dinei Ribero; and lettered by Taylor Esposito.  Writer de Souza begins a new series of challenges for Sheena in the story line, “Cenozoic,” which finds Sheena on a mission to save a nature preserve when she and her animal and human companions stumble upon an island out of time.

As Sheena: Queen of the Jungle, Volume 2 #8 opens, Sheena and her animal friends:  Yagua, Chim, and Pete, try to save a village on the time-lost island from two disasters – a dinosaur stampede and a lava flow.  In the village, Sheena will discover that she knows the villager better than she realizes.  Meanwhile, her human companions, Bob Kellerman and Martin Ransome, are getting into trouble with their new pal, a mysterious elderly man.

THE LOWDOWN:  Since July 2021, Dynamite Entertainment's marketing department has been providing me with PDF review copies of some of their titles.  One of them is Sheena: Queen of the Jungle Volume 2 #8, which is the eighth Dynamite Sheena comic book that I have read.

Sheena: Queen of the Jungle Volume 2 is one of my favorite Dynamite titles.  Dynamite's current incarnation of the character is a reboot by the prolific Hollywood screenwriter, Steven E. de Souza, who is also known for his work as a director and producer of films and television.

The current story arc, “Cenozoic,” is a smart mix of lost world and pulp fiction elements in which de Souza expertly paces the story via a clever series of reveals that keeps the reader engaged.  Also, de Souza's Sheena can be a sexy, jungle girl or a secret agent type like Marvel Comics' Black Widow – whichever action hero is needed.  I think de Souza's Sheena would make a more credible cinematic hero than the Tanya Roberts version of the character from the 1984 film (which still holds a place in my heart, anyway).

This eighth issue of the series also sees a change in artists, as Ediano Silva does much of the work.  Silva's style reminds me of the art of the great comic book illustrator, Mike Grell, whose storytelling style, both writing and drawing, would be perfect for Sheena.  Silva's art, Dinei Ribero's splashy colors, and Taylor Esposito's flashy lettering makes de Souza's story feel as big as it should

I have been highly recommending Sheena Queen of the Jungle Volume 2 since the first issue.  To miss out on it is to miss out on an excellent adventure comic book series.

Posted by Leroy Douresseaux at 3:15 PM