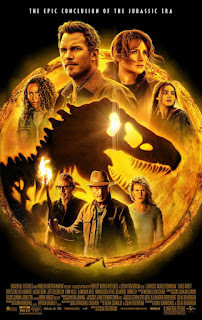 Jurassic World: Dominion opens three decades after the events depicted in Jurassic Park and four years after the cataclysmic volcanic eruption on Isla Nublar and the incidents at Lockwood Estate (as seen in Jurassic World: Fallen Kingdom).  Dinosaurs, no longer extinct, freely roam the Earth, causing ecological problems and the deaths of numerous humans – 37 in just the past year.  International corporation, Biosyn Genetics, has won the sole rights to collect dinosaurs, and it has created a dinosaur sanctuary in the Dolomite Mountains of Italy.

Meanwhile, Owen Grady (Chris Pratt) and Claire Dearing (Bryce Dallas Howard), former employees of the disastrous “Jurassic World” theme park, are still working to protect dinosaurs.  Claire works with a dinosaur protection organization and investigates illegal dinosaur breeding sites.  Owen works as a wrangler, relocating stray dinosaurs.  They live together in a remote cabin in the Sierra Nevada Mountains where they secretly raise 14-year-old Maisie Lockwood (Isabella Sermon), the granddaughter of the late Benjamin Lockwood and the granddaughter who turned out to a clone of Benjamin's late daughter, Charlotte Lockwood.  Living nearby is Blue, one of the Velociraptors (raptors) that Owen once trained at Jurassic World.  She is a mother, having given birth to a baby raptor that Owen named “Beta.”

It turns out that Lewis Dodgson (Campbell Scott), the CEO and owner of Biosyn, wants to possess both Maisie and Beta for the goldmine of information that their genes are.  Meanwhile, the original Jurassic heroes:  paleobotanist, Dr. Ellie Sattler (Laura Dern); paleontologist, Dr. Alan Grant (Sam Neill); and chaos theorist, Dr. Ian Malcolm (Jeff Goldblum), are also investigating Biosyn's dark plans.  But can they infiltrate Biosyn and avoid a hoard of hungry dinosaurs?

A few months ago, I read a review of Jurassic World: Dominion in which the reviewer said that the presence of the star trio of Jurassic Park:  Ellie, Alan, and Ian, diminished the presence of Jurassic World's star couple, Claire and Owen.  I disagree.  Actually, Chris Pratt and Bryce Dallas Howard make the most of every minute in which their characters are on screen.  In fact, I believe that the film is more about Claire and Owen than it is about Ellie, Alan, and Ian, although they are a huge part of the film's narrative.  I see the union of Jurassic Park's biggest characters and Jurassic World's biggest as the best of both worlds.  Frankly, this union should have happened in the first Jurassic World film.

In addition to the stars, Dominion sees the return of previous franchise supporting characters.  Omar Sy returns as Barry Sembene, Owen's fellow animal trainer from Jurassic World.  BD Wong's Dr. Henry Wu only appeared in the original Jurassic Park, but has appeared in all three Jurassic World films.  Dominion offers Henry a chance at redemption.  Dominion also offers two killer new characters, DeWanda Wise's Kayla Watts, a pilot who could be straight out of yesteryear's adventure serials – except Black women were not pulp fiction heroes.  Mamoudou Athie is espionage-cool as Ramsay Cole, the head of communications at Biosyn Genetics.

However, Jurassic World: Dominion is not really about stories or characters.  Yes, there is a lot going on; the movie is essentially a … park full of subplots, all around a basic (thin) plot – which is to stop Biosyn.  Dominion is really a science fiction action-adventure movie filled with action scenes.  There must be about twenty or so action set pieces:  a race to escape illegal breeders; a stop the poachers fight; run away from the giant, killer locusts; and running away from the dinosaurs in the forest, on a frozen pond, in plane, in a cave, etc.

And it all works.  The cast, director, writers, and crew of editors, sound, cameras, stunts, visual effects, assistants and everyone else.  They all come together to make a thrill machine of a movie with action scenes that keep the viewer too occupied to notice the lapses in logic and common sense.

In the first trilogy, the films that followed Jurassic Park were inferior to it.  In the Jurassic World trilogy, the final film is the best of the lot.  Bringing in so many characters from previous films is a good idea.  Putting them in a series of well-staged action scenes is another good idea.  Giving us a happy ending full of happy endings and heartwarming resolutions is an even better idea.  Jurassic World: Dominion is not a great film, but it is a very satisfying conclusion to what started back in 1993, when Jurassic Park made us believe that its dinosaurs were real.

Posted by Leroy Douresseaux at 3:24 PM