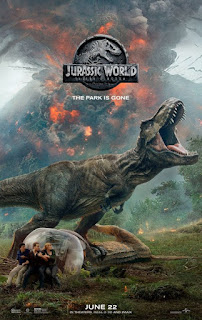 Jurassic World: Fallen Kingdom is a 2018 science fiction-thriller and dinosaur film from director J.A. Bayona.  It is the direct sequel to Jurassic World, the 2015 film that was a restart of the Jurassic Park film franchise, of which this film is the fifth installment.  Fallen Kingdom returns to Isla Nublar where an active volcano forces a rescue mission of the island's remaining dinosaurs, a mission that is not quite what it is supposed to be.

Jurassic World: Fallen Kingdom opens on Isla Nublar, the setting of the failed dinosaur theme parks, Jurassic Park and Jurassic World, where a secret mission takes place.  A once dormant volcano on the island has roared back to life and threatens to initiate an extinction-level event for the island's remaining dinosaurs.  Benjamin Lockwood (James Cromwell) is the former partner of John Hammond, the owner of Jurassic Park and the founder of InGen (the company that first cloned dinosaurs).  Lockwood and his aide, Eli Mills (Rafe Spall), have a plan to relocate the dinosaurs to a new island sanctuary.

Lockwood summons Claire Dearing (Bryce Dallas Howard), former Jurassic World operations manager, to reactivate the park's dinosaur tracking system.  She convinces Owen Grady (Chris Pratt), who trained the park's Velociraptors (raptor) to accompany her.  Grady is interested in rescuing the sole remaining raptor from his trainees, the pack leader, Blue.  With a former park technician, Franklin Webb (Justice Smith), and a paleo-veterinarian, Zia Rodriguez (Daniella Pineda), in tow, Dearing and Grady join mercenary leader, Ken Wheatley (Ted Levine), on a rescue mission to Isla Nublar.  As the volcano destroys the island, however, Dearing and Grady soon discover that not everything about this rescue mission as it is supposed to be.

Beyond that, Jurassic World: Fallen Kingdom is a serviceable scary movie.  Director J.A. Bayona offers a by-the-numbers directing style that makes the work of Jurassic World's director, Colin Trevorrow (who returns as this film's co-screenwriter), seem more imaginative than it actually is.  At least in Jurassic World, Trevorrow was able to make the characters and their conflicts, struggles, and dilemmas seem interesting.

In Fallen Kingdom, Claire Dearing and Owen Grady are mostly wooden, except for a few moments.  When he has to play Grady as the ass-kicking hero and rescuer of white maidens in distress, Pratt does not seem to really put his heart into his performance.  I think a child playing with action figures could make his toys more convincing as heroes than Pratt in in this film.

Jurassic World: Fallen Kingdom is pass-the-time entertainment that you watch because it is the most convenient or most available thing available, the way a one-dollar McDonald cheeseburger has to satisfy your hunger because that is all that is available to you.  Would I watch Fallen Kingdom again once it starts making the basic cable movie channel rotations?  Sure, if Jurassic World is not playing.


The text is copyright © 2019 Leroy Douresseaux. All Rights Reserved. Contact this site or blog for reprint and syndication rights and fees.