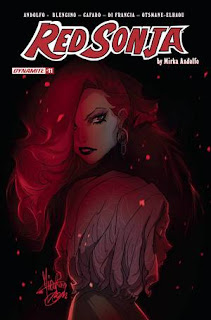 Dynamite Entertainment is now the publisher of Red Sonja comic books.  One of the recent titles, Red Sonja Volume 6, is under the guidance of popular Italian comic book creator, Mirka Andolfo.  It is written by Andolfo and Luca Blengino; drawn by Giuseppe Cafaro; colored by Chiara Di Francia; and lettered by Hassan Otsmane-Elhaou and Jeff Eckleberry.  In this new series, Red Sonja accepts the bounty to bring a girl named “Sitha” to a broker who will send her to her true home (Kithai).  The girl, however, becomes attached to Sonja and calls her mother and an adventure begins.

Red Sonja Volume 6 #11 opens at Agaras-Bulba, the place where Sitha is supposed to be delivered.  Sitha is finally reunited with her real mother once more.  With her mission at last accomplished, Red Sonja is ready to go home.  When she understands the “Dance of Wind and Fire,” she realizes that the village of Agaras-Bulba is not what is seems.  Nothing is what it seems.

Andolfo and Luca Blengino have fashioned in this series one of the best Red Sonja comic book series that I have ever read.  This tale of mothers and daughters is filled with genuine emotion, but it also has plenty of swordplay and violence as befitting a sword and sorcery comic book.  As the end comes, I know that I will miss it … but new readers will hopefully have a trade collection in which to enjoy it.

Posted by Leroy Douresseaux at 2:49 PM