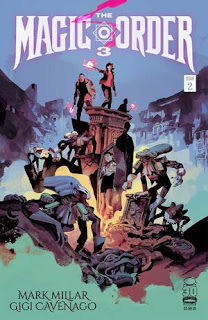 The Magic Order was a six-issue comic book miniseries written by Mark Millar and drawn by Olivier Coipel.  Published in 2018-19, The Magic Order focuses on the sorcerers, magicians, and wizards – in particularly the Moonstone family – who live ordinary lives by day, but protect humanity from darkness and monsters of impossible sizes by night.  A second six-issue miniseries, The Magic Order 2 (2021-22), was recently published.

The Magic Order 3 introduces the Asian chapter of the The Magic Order.  A six-issue miniseries, this third installment is written by Millar; drawn by Gigi Cavenago; colored by Valentina Napolitano; and lettered by Clem Robins.  The series finds Cordelia Moonstone focusing her attention on the Asian chapter's Sammy Liu and his impossible wealth.

The Magic Order 3 #2 opens in 1982 on that one night of the year when the Magic Order and those from whom they protect us call a truce.  They meet in abandoned factories and suburban homes across the world for some hard partying.  Not everything is debauched, as is the case with Leonard Moonstone and a woman named Salome (Mama Moonstone).

Well, now, it's time for some reunions.  It seems that time is neutral, but sometimes … time runs out on old deals, old oaths, old treaties, and the spells on old men.

THE LOWDOWN:  I used to think that The Magic Order was my favorite Mark Millar written, creator-owned comic book.  Now, I know it is.  I think I'm still stuck on The Authority when it comes to my all-time favorite Millar comic book.

I found a review in which the writer basically called Mark Millar's writing, especially on characters, shallow.  Follow Mark on Twitter, and you will discover that he is nostalgic, as comic book fans are want to be.  On the other hand, Mark's comic book writing is often free of nostalgia and sentiment, which is basically the potting soil for a substantial portion of American comics.

Mark and John Romita, Jr.'s Kick-Ass may be the most revolutionary comic book of the twenty-first century because it liberates the superhero comic book of sentiment and nostalgia.  In Kick-Ass, the characters are inscrutable and their motivations and wants are ever shifting.  It isn't that they are either rational or emotional; it is that what they want changes.  What they want and what they can do comes up against reality, and all hell breaks loose.

In The Magic Order 3, Mark's characters are inscrutable, mystifying, and incomprehensible.  For all the power they possess, they are ensnared by the rules of the Magic Order, but rules are bound to the time in which they were conceived.  The characters' power has not made them super-human; it has simply made their humanity more dangerous for them and for everyone around them.  Mark's character's aren't shallow.  The personalities that he has them present may only be a front or fraud, and, as readers, we assume we know what they want.  Comic book readers want decades of consistence from fictional characters.  Mark suggests that want and desire make the fictional characters (like humans) consistently inconsistent, which in turns fills his comics with great moments of the wonderfully unexpected.  There is always a surprise, and because of Mark's great characters, the surprise makes sense.

The other guy who is making The Magic Order 3 so great is Italian artist, Gigi Cavenago.  Cavenago conveys the sense of chaos and magic in Mark's scripts, and, most importantly, the sense of impending doom.  The Magic Order 3 #2 is unremittingly dark.  Cavenago rips off the sheen of sparkly magic with storytelling that revels in the gloom.  These characters all seem like bad or dangerous people, and whatever we expected from the series, Mark and Gigi aren't going to give it to us.

They respect us enough to give us the best, and The Magic Order 3 #2 is one of the best single-issue dark fantasy comic books since the days of Alan Moore and company's Swamp Thing and Neil Gaiman and company's The Sandman.  This is the comic book Marvel wishes Doctor Strange could be.

Posted by Leroy Douresseaux at 4:19 AM