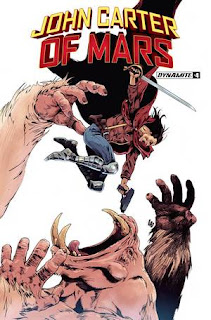 John Carter of Mars Volume 1 #4 opens on Earth, and the ruse of John and Eite is revealed.  Now, the two must come together to save Earth and Mars from merging, and also from the plot of the Therns and their approaching asteroid of pure Ninth metal.

On Mars, Dejah joins Thai and her husband, Lt. Fred Hines, and his fellow army officer, Charlie.  They hatch a plan to take on the Therns and their mad leader, Etor.  As Etor moves up the invasion, on Earth, John is facing death again.

THE LOWDOWN:  Since July 2021, Dynamite Entertainment's marketing department has been providing me with PDF review copies of some of their titles.  One of them is John Carter of Mars Volume 1 #4.  It is the fourth solo Dynamite John Carter comic book that I have read.

Writer Chuck Brown continues his fresh take on John Carter, this time, with strong action and violence.  Artist and colorist George Kambadais shines in this fourth issue as he holds the story together as it jumps from planet to planet and from one plot twist to another.  As usual, Kambadais' art super-charges Brown's script and transforms it into powerful and attention-grabbing storytelling.

John Carter of Mars is fun, and I think it can be so even for teen readers.   It surprised me, and I am delighted that it did.  I hope this version is around for a bit.

Posted by Leroy Douresseaux at 3:34 PM