Review: Viggo Mortensen is a Kingpin in Cronenberg's "CRIMES OF THE FUTURE" 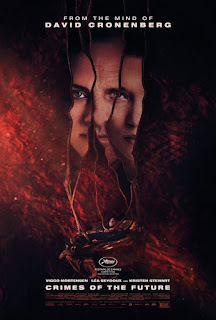 Crimes of the Future is a 2022 Canadian science fiction film from writer-director David Cronenberg.  The film focuses on a performances artist who showcases the metamorphosis of his internal organs with the help of his partner who performs surgery on him during the performance.

Crimes of the Future opens sometime in the future when humanity has experienced a number of biological changes and evolutionary changes to human physiology.  The film introduces Saul Tenser (Viggo Mortensen) and Caprice (Lea Seydoux), a performance artist couple.  Saul's body is afflicted by “accelerated evolution syndrome,” which forces his body to constantly develop new vestigial organs.  Tenser is in constant pain, and he relies biomechanical devices in order to sleep and to eat.  Using a “Sark autopsy module,” Caprice performs surgery on Saul before an audience as an act of performance art, performances which have made the duo world renown.

Saul and Caprice's performances have started to draw official, governmental, and law enforcement interest.  They meet Wippet (Don McKellar) and Timlin (Kristen Stewart), the two bureaucrats in charge of the “National Organ Registry,” which catalogs and stores newly developed and evolved organs.

Not everyone is excited about “body-growth” and consider it a “body-crime.”  Cope (Welket Bungué), a detective with the “New Vice Unit,” a governmental police agency, wants Tenser to infiltrate the worlds of evolutionists, the people that want to accept and encourage “accelerated evolution syndrome.”  After he meets Lang Dotrice (Scott Speedman), a grieving father, Saul goes so deep into the world of this new human evolution that he might discover something about himself.

Some consider Crimes of the Future to be both a science fiction and horror film, but I consider it to be only a science fiction film.  However, I do recognize how much the film travels into the realms of the genre of “body horror.”  In that, Crimes of the Future does share many similarities with David Cronenberg's last science fiction-horror film, eXistenZ (1999).  Both are set in a world where biotechnology invents new machines that can directly interface with human bodies and control those bodies.  In both films, public performances of man-machine interfaces are both popular and controversial, and a diverse group of entities:  law enforcement, fetishists, secretive agencies, rebels, dissidents, and subcultures seek to control the future and future-tech.

In Crimes of the Future, Cronenberg presents a world in which the evolutionary change is spurred on by technology and other man-made efforts.  Once this new evolution starts, it is free to do as it pleases, outside the considerations of humanity.  As in many of his films, a lead character, group of characters, and/or society and the world at large struggle to adapt to that change.  To one extent or another, they are against it, afraid of it, and some ultimately, even if reluctantly, embrace that change.

Two things hold this film together, David Cronenberg's vision and his muse, actor Viggo Mortensen as Saul Tenser.  Cronenberg and his collaborators have created a world in which biotechnological and evolutionary changes take place in drab and rundown settings.  In Crimes of the Future, Cronenberg does not need flying cars and off-world colonies in order to communicate to his audience that the world and mankind are in a future undergoing radical transformation.  True to his ways, Cronenberg is both provocative and exploitative and visionary and elegant as he executes a story of a world in which evolution forces humanity to live in the world it made.

Crimes of the Future has a number of eccentric performances.  Lea Seydoux makes Caprice grow … and evolve, and Kristen Stewart is impish and mysterious as Timlin.  However, Viggo Mortensen is both the center of this film's narrative and the outer boundaries of its ideas and ambitions.  He holds it together both as one afflicted by evolution and as an explorer of the world of evolution and new humans.  Mortensen's gift is to make people buy into the idea that he is indeed the character he plays and that what he does as that character is authentic and not a contrivance of a really talented actor.

Once again, David Cronenberg offers a film that examines horrifying change, and he does it without nostalgia and sentiment, but with a superb score by the great Howard Shore.  Yeah, Cronenberg is a genius, and Crimes of the Future is his latest masterpiece.  The ending, which feels like a quick wrap-up, is the only reason I won't call this film perfect, but it would be a crime of the present for me to quibble about that.