Review: "DRIVE MY CAR" is an Extraordinary Drama and is One of 2021's Best Films 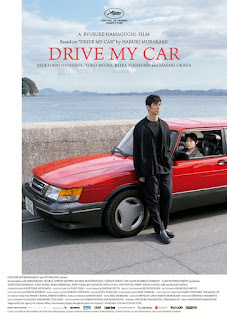 Doraibu Mai Kā is a 2021 Japanese drama film directed by Ryusuke Hamaguchi.  The film is also known by its English title, Drive My Car (the title which I will use for this review).  The film is based on author Haruki Murakami's short story, "Drive My Car," which is included in Murakami's 2014 short story collection, Men Without Women.  Drive My Car the movie focuses on a recent widower who is directing a play and dealing with the fact that he must accept someone else driving his beloved car.

Drive My Car is set in Japan and introduces actor and well-known theater director, Yusuke Kafuku (Hidetoshi Nishijima).  He was married to Oto (Reika Kirishima), an attractive screenwriter who suddenly died of a cerebral hemorrhage.

Two years later, Yusuke accepts a residency in Hiroshima, where he will direct a multilingual adaptation of Uncle Vanya, the 1898 play by the renowned Russian playwright, Anton Chekhov.  Yusuke also discovers that the theater company financing Uncle Vanya, the Hiroshima Arts and Culture Center, requires that Yusuke not drive his car, but instead be chauffeured in his own car.  He objects at first, but a reserved young female chauffeur, Misaki Watari (Toko Miura), reveals herself to be a skilled driver.  So Yusuke accepts someone else driving his car.

Yusuke begins casting the play and discovers that one of the auditioning actors is Koshi Takatsuki, a former colleague of his late wife, Oto.  As he works through the play with the cast, Yusuke deals with his grief, but discovers that the young actor, Koshi, and his young driver, Misaki, are also dealing with grief, regret, and inner turmoil.

That does not stop me from seeing Drive My Car as probably the best film of 2021.  The film is meditative and contemplative and has a smooth, calm pace which heightens the film's sense of intimacy.  This tranquility allows director Ryusuke Hamaguchi to direct a film in which it really looks like the actors are engaging in self-examination.  The film's themes of regret, of accepting others as they are, and of self-acceptance feel genuine.

One might think that Drive My Car is dull or even complicated, but it is not.  The film is rather straightforward, and the confrontations between characters can be intense but feel constructive.  Drive My Car may be too slow for most American audiences, but I think that serious film lovers will find themselves engrossed by this hauntingly beautiful and most painfully human film.  They may even find it helpful.  Watching the film, I felt as if I were experiencing something I needed to see and hear a long time ago.

This film received many honors, including winning the Academy Award for “Best Foreign Language Film.”  Still, I would have liked to have seen some of its cast, especially lead actor, Hidetoshi Nishijima (Yusuke), and supporting actress, Toko Miura (as the drive Misaki), earn Oscar acting notices.  Yusuke and Misaki's scenes at the latter's old home during the last half hour of the film are some of the best in years and some of the best performed.  Other cast members:  Reika Kirishima, Masaki Okada, and Park Yu-rim, are also worthy of award notice.

Drive My Car's cinematographer, Hidetoshi Shinomiya, made the film one of the most beautiful, if not the most beautiful, of the year.  From majestic exterior vistas to shadowy and cozy interiors shots, Drive My Car looks both intimate and epic.  Eiko Ishibashi's film score, with its futuristic flourishes and electronica sensibilities, accentuates Shinomiya's cinematography,

The text is copyright © 2022 Leroy Douresseaux. All Rights Reserved. Contact this blog or site for reprint and syndication rights and fees.

Posted by Leroy Douresseaux at 3:30 PM