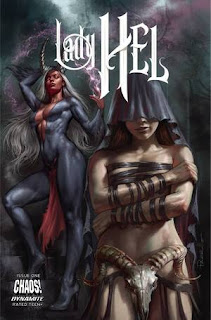 Lady Hel was a character originally known as “Mistress Hel,” that was first created to take the place of classic Chaos Comics' character, Lady Death, in Dynamite Entertainment's CHAOS! Universe.  Mistress Hel was created by Tim Seeley, and she debuted in Dynamite's Chaos! #1 (May 2014).

Lady Hel returns in a new comic book series, Lady Hel Volume 1.  It is written by Erik Burnham; drawn by Zhengis Tasbolatov; colored by Salvatore Aiala; and lettered by Dave Sharpe.  The new series tracks the title character's bid to regain her throne, although she has much less power than she once had.

Lady Hel Volume 1 #1 opens in Tartarus, a realm of the dead – because if there is a multiverse of universes, then, there is a multiverse of realms of the dead?...  Lady Hel, the personification of death and the absolute ruler of Helheim, ruled in... Helheim, but she finds herself in someplace else.  Now, Lady Hal finds herself going against Persephone, hostess of the damned and embodiment of death.  But first, there are questions.  For instance, why is Persephone expecting her?

THE LOWDOWN:  Since July 2021, the marketing department at Dynamite Entertainment has been providing me with PDF review copies of some of their titles.  One of them is Lady Hel Volume 1 #1, the first Lady Hel comic book I have read

Lady Hel #1 may be the first Dynamite Entertainment first issue that does not interest me.  It is not a bad comic book, but writer Erik Burnham's script makes me believe that the comic book really begins with the second issue.  Fans of Dynamite's Chaos! bad girls will want to check this out, however.

I READS YOU RECOMMENDS:  Fans of Purgatori will want to read Lady Hel, Volume 1.

Posted by Leroy Douresseaux at 1:03 PM