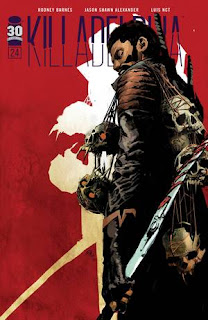 Killadelphia focuses on James “Jim” Sangster, Jr. and his father, revered Philadelphia homicide detective, James Sangster, Sr., a vampire!  Father and son lead a ragtag team comprised of a medical examiner (Jose Padilla), werewolves, a witch, and a rebellious, but special young vampire (Tevin Thompkins a.k.a. “See Saw”) in a bid to save Philly.  Their adversary is a former First Lady, the vampire Abigail Adams.

As Killadelphia #24 (“Time to Die”) opens, the legendary vampire hunger, Toussaint Louverture, leads his forces into Philadelphia. Meanwhile, See Saw remembers the lessons he learned from the fate of his mailman father.  He is ready to fight.  So are the werewolf Zubiya and her pack, and their ally, Tituba the Stregherian.

George Washington, Founding Father and Vampire King, and his forces watch.  The Sangsters and the allies gather.  The war begins.

THE LOWDOWN:  We have reached the final chapter of Killadelphia's fourth story arc, “The End of All.”  It prepares the way for the next arc, but before it departs, it leaves us with bittersweet and just plain bitter moments.

As much as I totally enjoy the vampire and werewolf bloodshed of this wonderful comic book, I also like the contemplative side of Killadelphia.  Writer Rodney Barnes and artist Jason Shawn Alexander consistently offer many side dramas, focusing on particular characters.  These vignettes illuminate themes or fill in details concerning current or coming story lines and subplots.

In Killadelphia #24, Barnes and Alexander reveal another side of Tevin Thompkins a.k.a. “See Saw.”  This is the side that will carry See Saw into war, but the authors are never shy about sharing the bitter harvest that America has been for African-Americans for centuries.  There is no glance into Tevin's story that is free of horror.  It is as if Barnes and Alexander are telling us, “This may be dark fantasy, suckas, but this ain't escapism.”  For a moment, the authors made vampires seem less frightening than the adversaries Tevin's father faced.  This won't be the last time the threat of vampires pales before the real horrors of the United States of America...

[This issue contains an afterword by Rodney Barnes.]