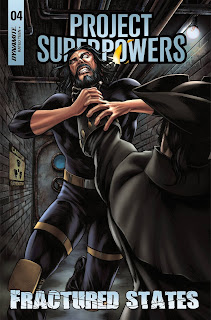 Project Superpowers: Fractured States Volume 1 #4 opens on Staten Island, Cyber State, 2037.  This is the story of how Samson disappeared and how the Black Terror was infected with Dynamic Man's “nano-virus.”  In the present (2052), the original Black Terror, still fighting the infection, is telling that story to his prime Black Terror trooper (Bobbi) and John Doe.

When President Gene West (the former “Futureman”) is kidnapped, the Black Terror troopers and John spring into action.  Now, they will learn the identity of the Patriot Killer, and John may face his doom.

THE LOWDOWN:  Since July 2021, Dynamite Entertainment's marketing department has been providing me with PDF review copies of some of their titles.  One of them is Project Superpowers: Fractured States Volume 1 #4, which is the fourth Project Superpowers comic book that I have read.

Writers Ron Marz and Andy Lanning are writing a spectacular superhero comic book, so I want to convince you, dear readers, to give this series a try.  This series blends superhero fantasy, mystery, conspiracy, and science fiction, but Fractured States #4 emphasizes action and horror.

Posted by Leroy Douresseaux at 1:46 PM