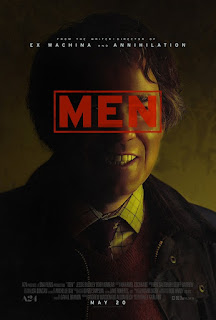 Men is a 2022 British horror film from writer-director Alex Garland.  The film focuses on a recently widowed young woman on a solo holiday to the English countryside who finds herself tormented by a group of strange men.

Men introduces a young woman named Harper (Jessie Buckley).  Following the shocking and unexpected death of her husband, James Marlowe (Paapa Essiedu), London-based Harper decides to take a holiday alone in the small village of Cotson, located in the English countryside.  She will be spending her two weeks staying in a pricey rental, Cotson Manor.

Not long after Harper arrives at the spacious manor house, things start getting strange.  She is welcomed by the manor's owner, an odd sort of fellow named Geoffrey (Rory Kinnear).  Later, while taking a walk, Harper has a bizarre encounter with a strange man who seems to be naked.  As things start to turn more bizarre, Harper realizes that all the men in the village look alike...

I can see why Alex Garland's film, Men, is so controversial and even considered incendiary.  Basically, Garland's film is a horror movie about toxic masculinity, and the main point of toxicity is that men want to control how women react to men, maleness, and masculinity.  Here, men think that women should downplay some acts of violence and aggression, and that women exaggerate even the most violent and threatening behavior of males.  Harper's husband, James, is emotionally abuse and manipulative, and even his threats against himself are attempts to control Harper, in addition to being an act of violence against her.

In Men, Garland does not offer answers or, at least, many of them.  He uses surrealism and tropes from the horror sub-genre known as “folk horror” (isolated English village, pagan symbolism, atmosphere music, etc.) to create a scary movie that practically yells, “Fact!  Toxic masculinity is bad, and men are controlling and manipulative just as much as they say that women are.”  And that makes Men a flashpoint work of art and entertainment in a flashpoint time, so it automatically has groups of people that will not like it or be very critical of it – even before seeing the film.

The performances are good, but not great.  It is not that the actors aren't capable; it is just that the movie does not give them many verbal showcases.  Thus, Jessie Buckley spends a lot of time looking scared, but when she can speak as Harper, the film has more dramatic impact.  Also, as Geoffrey and others, Rory Kinnear gets to look like a chameleon without getting to play a chameleon.

The politics of men and women aside, Men is yet another film that reveals Alex Garlands ability to take conventional ideas for stories and twist them into unconventional film narratives.  His films offer his audience a visceral and unforgettable experience.  In this case, Garland presents Men as a kind of magical realism; the surreal and real live side by side and are sometimes as one.  Garland is a visual stylist as a film director and a maverick as a screenwriter.  With his contentious film, Men, Garland's reach sometimes exceeds his grasp, but the movie is simply more evidence that he can take his audience in the most unexpected directions.

Posted by Leroy Douresseaux at 2:40 PM