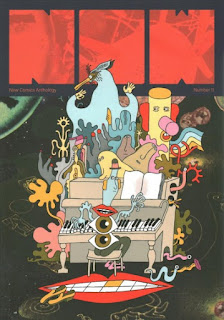 NOW: The New Comics Anthology is an alternative-comics anthology series launched in 2017 and edited by Eric Reynolds.  NOW is published by alt-comix and art comics publisher, Fantagraphics Books.  Over its four-plus decades of existence, Fantagraphics has published what is probably the most diverse collection of comic book anthologies in the history of North American comic books.  That line-up includes such titles as Anything Goes, Critters, Mome, Pictopia, and Zero Zero, to name a few.

NOW: The New Comics Anthology #11 offers a selection of fourteen cartoonists and comics creators, as well as a back cover “comics strip” from Nick Thorburn.  NOW #11 holds to editor Eric Reynolds' creed (from NOW #1) that NOW showcases “...as broad a range of quality comic art as possible...”

The contributors list also includes a Leroy favorite, Steven Weissman.  But let's take a look at each of NOW #11's cartoonists' contributions:

THE LOWDOWN:  The illustration that acts as NOW #11's cover art is entitled “Untitled,” and is produced by Daria Tessler.  It looks like something at least partially inspired by the animation in “Monty Python's Flying Circus.”

“Untitled” by Theo Ellsworth:
The NOW regular offers a one-page comic with an impressive display of curvy lines.

“Snub” by Jesse Simpson:
What's with the eyes on the two lead characters, seriously?  I want to say that it has something to do with either emotions or personality.  So after being snubbed (maybe) by fellow party-goer, “Kevin,” two friends talk it out and reveal that it does bother them, although they are also saying it does not.  I like that Simpson creates what seems like a natural conversation.  The characters are talking as much to themselves as to each other.  I want more of this.

“Wounded Candy” by Justin Gradin:
Grover, a garbage man employed by a waste disposal company called, “Talkin' Trash,” and a creature, something I call a “sidewalk spirit,” have an adventure with a celebrity Halloween mask, lots of garbage, and vomited gum.  “Wounded Candy” is the kind of edgy, surreal fantasy that alternative cartoonists produce.  Why draw a Doctor Strange comic book for Marvel that pretends to be “way out there” when you can go “off the beaten path” in many phantasmagoric directions via alt-comics?  [If you say page rate...]  Once again, I say “Encore! Encore!”

“The Junkman” takes place in a junkyard.  It features a young man with an instant camera and an older man sitting in the remains of an automobile, a 1955 Chevy Belair.  The young fellow likes to take pictures of junk, and the older dude likes to ponder what could have been.  Lane's art is sort of a combination of Charles Burns and of EC Comics' Al Feldstein and Jack Kamen.  Lane's art looks like it belongs in a 1950s comic book, which makes it the perfect method and medium for a story that laments choosing practicality over risk.

As lovely as the art is, with all its textures and draftsmanship, “The Junkman” is driven by the high-quality of the dialogue and how it evolves this moment in time between two different men.  They are really talking past each other for a time, and then Lane reveals that in their differences, there are connections and familiarity.  “The Junkman” is a tremendous work of comics storytelling.

“Interior Design,” “The Visit,” “Allo?” and “The Great Escape” by Baptiste Virot:
This suite of four stories, which totals seven pages, are surreal exercises concerning the difficulty of escaping one's current situation.  Virot's “clear line” style and flat colors reveal the skills of someone investing in print making.  I wish periodical comic books could support work like this, but alas...

“Mandorla” by Stacy Gougoulis:
I was just talking to a friend about the idiotic things stupid people do for a selfie.  Starting with a failed selfie, “Mandorla” is about the perception of time, possible lives, and especially about how life goes on … after us.  As the story goes down the rabbit hole of time, I found myself drawn into it.  Gougoulis' storytelling is so powerful, I barely escaped.

“Mission: E5” by Natalia Novia & Ariel Lopez V.:
Woodcut art, acid, Jack Kirby, and the last six decades of science fiction films come together in “Mission: E5.”  At the end of the story, we are informed that “Mission: E5” was inspired by the 1917 story, “A la Deriva” (“Adrift”), from author Horacio Quiroga, the influential Uruguayan short story writer (among other things).  I also felt drawn in by this story, and once again, I barely escaped the time-bending surrealism.

“Precious Rubbish” by Kayla E.:
This comic book is another case of adaptation, in this case a combination of old publications, including comic books, and text messages between the cartoonist and her elderly mother.  “Precious Rubbish” is an ordeal to read, but not because it is a terrible work.  It is as if Kayla E. is exorcising some personal demons … that I recognize.  So, this is another excellent entry.

“Monet Coil” by Chris Wright:
This story pits French surrealist Claude Monet and American expatriate and prolific portrait painter, John Singer Sargent, in a battle over a woman.  Monet believes that every moment is a rebirth, but Sargent just wants Monet to stay away from the woman.  Monet and Sargent were apparently real-life homies, but I have not found anything about them fighting over a woman.  However, I enjoyed this philosophical tale, which reminds me of the work of the late great cartoonist, Richard Sala.

“Now” by Steven Weissman:
This story about two women who place a baby in the mouth of a weird breed of cat called a “Qat” unsettles me.  But I'm a fan of Weissman, so I like it.

“Shortcut” by Josh Simmons:
I am still chuckling at this tale of two dopers who come to an ignoble end after taking a shortcut while smoking their weed.  Encore!  Encore!

“Some Guy's Food” by Theo Ellsworth:
This is an effective one-page comic.  I have feeling that someone might exploit this for a YA dystopian prose or graphic novel before the talented Theo Ellsworth does.  Seriously, these are nine panels full of raw comics and graphical storytelling power.

“Untitled” by Nick Thorburn:
This is another weird animal tale, but it is less creepy that Weissman's tale.

NOW #11 may be the best entry in the series since NOW #1, and that is saying a lot.  Not too long ago, I declared NOW #10 to be a series high point.  What The New Yorker is to American single-panel cartoons, NOW is to alternative and art comics.  If I have to pick a best of NOW #11 – and I don't – I'll choose Tim Lane's “The Junkman,” but tomorrow, I could change my mind.

I READS YOU RECOMMENDS:  Fans of classic alternative-comics anthologies will want to discover NOW: The New Comics Anthology.


The text is copyright © 2022 Leroy Douresseaux. All Rights Reserved. Contact this blog for syndication rights and fees.

Posted by Leroy Douresseaux at 3:01 PM