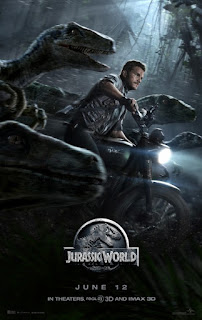 Jurassic World is a 2015 science fiction-thriller and action-adventure film from director Colin Trevorrow.  The film is a restart of the Jurassic Park  film franchise.  Thomas Tull of Legendary Pictures and Steven Spielberg, who directed the original film, Jurassic Park (1993), are the executive producers of this movie.  Jurassic World returns to the setting of the first film, which is now a popular dinosaur theme park, but a new attraction turns the place into a nightmare.

Over two decades after the disaster that was the late John Hammond's Jurassic Park, the island of Isla Nublar now has a fully functioning dinosaur theme park, named Jurassic World.  That is where Gray Mitchell (Ty Simpkins) and his older brother, Zach (Nick Robinson), are headed, with VIP access thanks to their aunt, Claire (Bryce Dallas Howard), who is Jurassic World's operations manager.

This new park is run by the Masrani Global Corporation, which also owns InGen, Hammond's genetics company that invented the process of using DNA found in dinosaur fossils to make new dinosaurs.  However, after a decade in operation, Jurassic World has been experiencing a decline in visitor rates, because dinosaurs are no longer the “hot thing.”

Park owner Simon Masrani (Irrfan Khan) demanded that a new attraction be created to spark visitors' interest.  Behold Indominus‍ rex, a hybrid dinosaur made by combining the DNA of an unknown number of animals.  U.S. Navy veteran, Owen Grady (Chris Pratt), trains Jurassic World's four Velociraptors, which have imprinted on him as the pack alpha.  Masrani wants Owen to evaluate Indominus‍ rex before this new attraction is presented to the public. Owen discovers that this hybrid dinosaur is really dangerous.  Then, everything goes bad...

Jurassic World is quite an entertaining movie.  I watched it on DVD, and there were times that I could not stop watching it, even when the phone rang.  Like the Indominus rex, Jurassic World is itself a hybrid, as it blends the disaster film with the monster movie (much in the way a Godzilla film does).  This is pure escapist entertainment.  Pop some popcorn; sit on the sofa and turn out the lights.  Watch this movie and have a blast...

...because beyond that, you won't have much.  Jurassic World may be a restart of the franchise, but it lacks the newness and freshness, the sense of wonder and awe, that defined the original, 1993's Oscar-winning Jurassic Park.  So rather than being a restart, Jurassic World is in actuality nothing more than another Jurassic Park film.

The characters are not interesting, and their plight did not grab me, as the characters' troubles in the first film did.  When the most interesting female character in this film is a CGI dinosaur, as is the case with the raptor, Blue, then, the movie has fundamental problems.  Even the relationship troubles between the two brothers and its resolution feel forced and phony.  I can't remember the last time juvenile sibling characters had the kind of stiff dialogue that the Mitchell brothers had.

I like Chris Pratt, and he uses all his charm to make something out of Owen Grady, a character with potential, which the writers and director of this film did not seem to realize.  Bryce Dallas Howard uses her acting skills to make something of the mannequin that is Claire, but that character is beneath her.  And poor Omar Sy comes across as a pitiful token, playing Owen's stuck-in-the-corner assistant, Barry; yeah, Barry wasn't even worth a last name.

Yeah, Jurassic World is a blast as a scary monster movie, a dumb sci-fi thriller that actually delivers on the thrills.  But in the end, it is nothing more than film product – the equivalent of a fast food hamburger that you have already forgotten a few minutes after eating it.