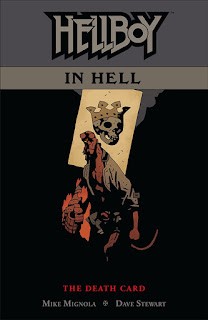 “Doing the cover to this collection was tough and of course I overthought the hell out of it,” said Mignola. “It's the end of the series and so much happens. How do I get that onto a cover? In the end, after doing two self-rejected covers, I decided to just illustrate the title of the book. THE DEATH CARD. There is also a fairly subtle nod to the climax of the book in there, but mostly it’s illustrating the title while trying to do a composition very similar to the cover of the first collection. Since the two books do make one story, I really wanted to design the book covers so they would work well side by side.”

After facing off for a second time against the Vampire of Prague, Hellboy, dead and in Hell, comes down with a fatal illness, and seeks the help of an incompetent team of doctors. As he explores the geography of Hell, learning little from a confused pair of map makers, Hellboy gets a glimpse of the new World Tree that he helped to create, stands accused of murder by his own sister and, in a way, brings about the destruction of Pandemonium itself.

While 2016 will see the conclusion of HELLBOY IN HELL, ABE SAPIEN (which concludes in August) and B.P.R.D.: HELL ON EARTH (which concludes in November), Dark Horse Comics will publish new issues of HELLBOY & THE BPRD co-written by Mignola and iZOMBIE co-creator Chris Roberson and illustrated by fan favorite artists, as well as unannounced titles which Mignola will co-write, but not illustrate.

HELLBOY IN HELL Volume 2 is available in comic shops October 5 and bookstores October 18.

HELLBOY IN HELL Volume 1 is now available from all major retailers.

“Since introducing Hellboy in March of 1994, Mike Mignola has built a huge comic-book universe around the character on par with what Stan Lee and Jack Kirby accomplished in the Silver Age of Marvel Comics.. . .  Each new visual is like a master class in establishing mood, and Mignola’s skill increases as he refines his line, proving that less is more when it comes to his pulp-inspired fantasy horror universe.”

“One of the most beloved characters in the comic book community.”
—IGN

“An inspiration to creators hoping to achieve similar success with their own characters and ideas.”
—MENTAL FLOSS


About Mike Mignola
MIKE MIGNOLA’s fascination with ghosts and monsters began at an early age; reading Dracula at age twelve introduced him to Victorian literature and folklore, from which he has never recovered. Starting in 1982 as a bad inker for Marvel Comics, he swiftly evolved into a not-so-bad artist. By the late 1980s, he had begun to develop his own unique graphic style, with mainstream projects like Cosmic Odyssey and Batman: Gotham by Gaslight. In 1994, he published the first Hellboy series through Dark Horse. As of this writing there are twelve Hellboy graphic novels (with more on the way), several spinoff titles (B.P.R.D., Lobster Johnson, Abe Sapien, and Sir Edward Grey: Witchfinder), prose books, animated films, and two live-action films starring Ron Perlman. Along the way he worked on Francis Ford Coppola’s film Bram Stoker’s Dracula (1992), was a production designer for Disney’s Atlantis: The Lost Empire (2001), and was the visual consultant to director Guillermo del Toro on Blade II (2002), Hellboy (2004), and Hellboy II: The Golden Army (2008). Mike’s books have earned numerous awards and are published in a great many countries. Mike lives somewhere in Southern California with his wife, daughter, and cat.

Posted by Leroy Douresseaux at 8:43 PM