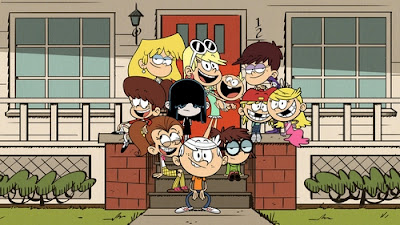 BURBANK, Calif.--(BUSINESS WIRE)--10 sisters and one brother bring a whole lot of havoc in Nickelodeon’s newest animated comedy The Loud House, debuting Monday, May 2, 2016, at 5:00p.m. (ET/PT). Inspired by creator Chris Savino’s life growing up in family of 10 kids, the 26-episodes series follows Lincoln Loud and his 10 sisters as he gives an inside look at what it takes to survive the chaos of a huge family. A first-look at full-length episodes from the series will be available Friday, April 1, 2016, and Friday, April 15, 2016, on Nick.com, the Nick App, and Nick On Demand. New episodes will premiere weekdays at 5:00p.m. (ET/PT) through May on Nickelodeon. The Loud House is produced by Nickelodeon Animation Studios in Burbank, Calif.

The Loud House follows 11-year-old Lincoln, the only boy in a family with 10 sisters who each have unique personalities: Lori, Leni, Luna, Luan, Lynn, Lucy, Lola, Lana, Lisa, and Lily. With his best bud Clyde, Lincoln always comes up with a plan to stay one step ahead of the chaos, but whether or not it works is where the adventures begin.

In the premiere episode “Left in the Dark,” Lincoln wants to watch the finale of his favorite show, but in order to do that, he must beat each sister to the couch first. Then, in “Get the Message,” after Lincoln leaves a scathing voicemail on sister Lori’s phone, he realizes he has to erase it before she hears it.

The Loud House is based on an animated short of the same name from Nickelodeon’s annual Animated Shorts Program. It is the first series to be greenlit out of the global program which is designed to mine and cultivate a new generation of creative talent. Created and executive produced by Chris Savino (Rocko’s Modern Life, The Powerpuff Girls), The Loud House voice cast includes: Grant Palmer as Lincoln Loud; Caleel Harris as Clyde McBride; Catherine Taber as Lori; Liliana Mumy as Leni; Nika Futterman as Luna; Cristina Pucelli as Luan; Jessica DiCicco as Lynn and Lucy; Grey Griffin as Lola, Lana and Lily; and Lara Jill Miller as Lisa.

Viewers can visit the The Loud House page on Nick.com and the Nick App to learn more about the show and its characters, and get a behind-the-scenes look at the series. Beginning Monday, April 25, witness some crazy antics in the new game “Welcome to The Loud House,” where users can place Lincoln in different environments with any four of his sisters to manipulate a fun mix of hilarious and unexpected results. Episodes of The Loud House will be available on Nick.com and the Nick App, along with platforms including iTunes, Amazon, Xbox, Google Play, Vudu, Playstation, and Nick On Demand.


About Nickelodeon
Nickelodeon, now in its 36th year, is the number-one entertainment brand for kids. It has built a diverse, global business by putting kids first in everything it does. The company includes television programming and production in the United States and around the world, plus consumer products, online, recreation, books and feature films. Nickelodeon’s U.S. television network is seen in more than 90 million households and has been the number-one-rated basic cable network for 20 consecutive years. For more information or artwork, visit http://www.nickpress.com. Nickelodeon and all related titles, characters and logos are trademarks of Viacom Inc. (NASDAQ: VIA, VIAB).