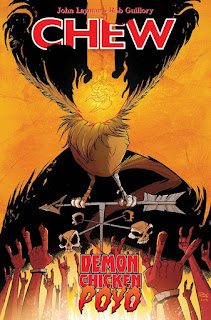 The final episode of the groundbreaking and historic Poyo trilogy: DEMON CHICKEN POYO. Hell wants him. Heaven won’t take him. Earth needs him. That was also the tagline for that godawful Constantine movie. But Poyo is so badass, he stole it from Keanu Reeves!

“Several years ago Rob Guillory and I changed the face of comics, and indeed all pop culture, with the release of Secret Agent Poyo,” said Layman. “They said it could not be done, but we followed that up with an even more vital, timely and sense-shattering sequel, Warrior Chicken Poyo. And here, we’ve done the unthinkable, as we’ve outdone ourselves YET AGAIN with our greatest triumph yet, Demon Chicken Poyo.”

“We expect this book to shake the very foundations of the comics industry, with a comic so astonishing and impossibly amazing that the world will be forever altered,” Layman added. “Religions will be formed around this comic. Monuments will be built. This is the seminal comic for the 21st Century, and quite likely the new millennium. The wise consumer will buy multiple copies, and the canny retailer will stock their store shelves with this comic, and nothing else."

Posted by Leroy Douresseaux at 5:37 AM