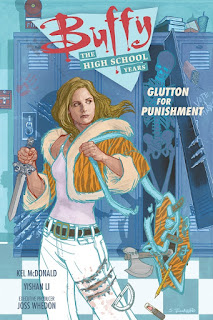 Home Economics Has Never Been Scarier

Set during Season 1 of the television series and executive produced by Joss Whedon, Glutton for Punishment continues the humor and excitement as Buffy the Vampire Slayer and her friends navigate the tumultuous balance of being both high schoolers and monster fighters.

“McDonald has a real affection for magical-world building,” says io9 of author Kel McDonald (Misfits of Avalon), who is returning to the Whedonverse to bring more monsters and high-school high jinks into the life of teenage Buffy!

When Buffy and Xander sign up for home ec, assuming it will be an extra-credit cakewalk, they aren’t aware that the teacher is a ravenous tiger demon in disguise. The demon’s unquenchable appetite has him kidnapping his top students and forcing them to cook for him, and when Xander claims some store-bought treats are his own creations, he becomes the demon’s next victim! It’s not enough that Buffy has to keep her grades up, but she also has to rescue her friends and fellow students—and give the tiger demon his just desserts!

Buffy: The High School Years—Glutton for Punishment is in stores October 19, 2016.


About Kel McDonald and Yishan Li
Kel McDonald has been working in comics for over a decade—most of that time has been spent on her webcomic Sorcery 101. More recently, she has organized the Cautionary Fables and Fairytales anthology series, while contributing to other anthologies like Dark Horse Presents, Smut Peddler, and Sleep of Reason. She is best known for her recent work Misfits of Avalon for Dark Horse Comics and Adventure Time for BOOM!.

Yishan Li is an UK based illustrator who has worked with DC Comics, Dark Horse Comics, Titan Comics, Random House, Delcourt, and Dargaud.  Her most recent work is Buffy: The High School Years—Freaks & Geeks from Dark Horse Comics.