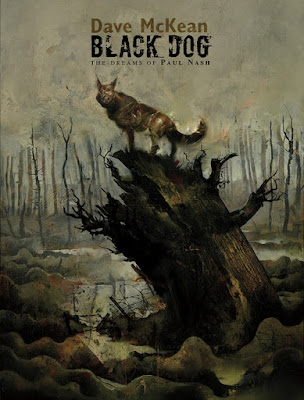 Black Dog takes biographical moments from Paul Nash’s life and explorations of his work, writing, and imagination and mixes them with firsthand accounts of the First World War. Presented as a series of surreal dreams, the stories add up to a moving piece about how war and extreme situations change us and how we deal with the resulting pain—in Nash’s case, by turning landscapes into powerful and fantastical “psychoscapes.”

Best known for his collaborations with Neil Gaiman, McKean defied expectations with his stunning debut as writer and artist in Cages, winner of multiple awards for Best Graphic Album. McKean is also the winner of the Alph-Art, Pantera, Harvey, Spectrum, and BSFA awards.

In addition to the standard release, Black Dog will also receive a limited edition of 400 copies featuring an exclusive plate signed by Dave McKean.

Praise for other works by Dave McKean:

“One of the most important works of comic art in the last decade.”
—The Comics Journal

“It is compulsively readable, with a lyrical tone that moves the reader through the rougher, more elusive passages as it strives at the very edge of the form’s limitation.”
—Comic Foundry Magazine

“The finest comic being created today. Get it and see what heights narrative graphic art can achieve.”
—The Fine Print

After a trip to New York in 1986 during which he failed to find work as a comics artist, McKean met writer Neil Gaiman and the pair collaborated on a short graphic novel of disturbing childhood memories, Violent Cases, published in 1987. This was followed in 1988 by a Black Orchid miniseries (again with Gaiman) and Hellblazer covers for DC Comics. Beginning in 1989 he produced the covers for Gaiman’s celebrated series The Sandman, all its collected editions and many of its spin-offs, and the Batman graphic novel, Arkham Asylum: A Serious House on Serious Earth, with writer Grant Morrison (1989). McKean has gone on to collaborate further with Neil Gaiman in both print and film.

About Dark Horse
Founded in 1986 by Mike Richardson, Dark Horse Comics has proven to be a solid example of how integrity and innovation can help broaden a unique storytelling medium and establish a small, homegrown company as an industry giant. The company is known for the progressive and creator-friendly atmosphere it provides for writers and artists. In addition to publishing comics from top talent, such as Eric Powell, Mike Mignola, Geof Darrow, Brian Wood, Gail Simone, Stan Sakai, and Guillermo del Toro, and comics legends, such as Will Eisner, Milo Manara, Kazuo Koike, Neil Gaiman and Frank Miller, Dark Horse has developed its own successful properties, such as The Mask, Ghost, X and Barb Wire. Its successful line of comics, manga and products based on popular properties includes Dragon Age, Buffy the Vampire Slayer, Aliens, Conan, Tomb Raider, Halo, The Witcher, Serenity, Game of Thrones, and Avatar: The Last Airbender. Today Dark Horse Comics is the largest independent comic book publisher in the US and is recognized as one of the world’s leading entertainment publishers.

Posted by Leroy Douresseaux at 7:08 PM