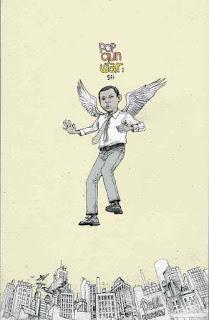 Critically acclaimed writer/artist Farel Dalrymple (The Wrenchies, It Will All Hurt) will release a new edition of POP GUN WAR: GIFT this May.

POP GUN WAR: GIFT is about childhood, self-discovery, oppression, guilt, dreams, loneliness, whatever—and an inner-city boy named Sinclair, who discovers a pair of discarded angel wings. With these wings, Sinclair flies around the city and gets into adventures.


Posted by Leroy Douresseaux at 10:04 AM