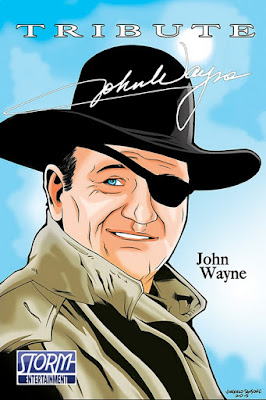 Storm Entertainment released a new comic book biography on the legendary John Wayne. Tribute: John Wayne was released in both print and digital.

The Tribute line of comic books tells the stories of the classic entertainers that have passed on,” says Storm Entertainment’s publisher, Darren G. Davis “It is a way for us to honor these people who have made a difference in the world.

Print copies of the book can be ordered at Comic Flea Market for $3.99.

The “Tribute” series serves as a pop culture companion to Storm Entertainment’s successful “Female Force,” “Political Power,” “Orbit,” and “Fame” series. The biography comic form allows Storm’s talented writers to delve into the history of certain newsworthy figures and explore what shaped them. Storm Entertainment’s biographical comic books have been featured on CNN, Politico, Roll Call, The Today Show, FOX News, and in People Magazine among thousands of others.