SuBLime Announces the Publication of the Two-Volume "Midnight Stranger" 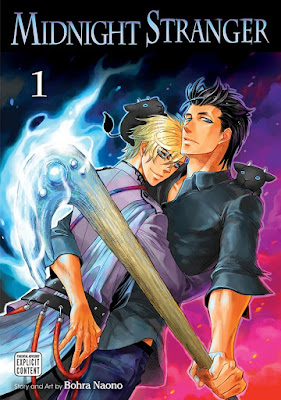 The paranormal fantasy series about the love between a god and his goat-spirit servant will be released in print and is rated ‘M’ for Mature Readers. Each volume of the 2-volume MIDNIGHT STRANGER series will carry an MSRP of $12.99 U.S. / $14.99 CAN. The second and concluding volume of the series is scheduled for release later this year.

In MIDNIGHT STRANGER, Roi, a black goat spirit, is getting bullied when out of nowhere he’s rescued by the beautiful fire god Xiu. Xiu gives Roi the ability to take human form, and a grateful Roi decides to serve Xiu as his new master. Now by Xiu’s side every day, Roi wishes to become more than just his servant. Painfully aware of just how ugly he is, Roi believes Xiu could never care about him, and one day something happens to bring Xiu's wrath down on Roi. What must he do to gain the fire god’s favor?

“Manga creator Bohra Naono has drawn wide praise for her previously published English titles Yokai’s Hunger and SuBLime’s very own THREE WOLVES MOUNTAIN. Because of this, readers have consistently requested we publish more of her work, and we think they will be pleased with this new release,” says SuBLime Editor Jennifer LeBlanc. “We are excited to expand the SuBLime catalog with this new series and look forward to fans of Bohra Naono adding it to their own collections.”

Yaoi manga artist/creator Bohra Naono has created over twenty manga, some of which also have been adapted into popular drama CDs. She has also published several doujinshi (independent comics) under the circle name “NAIFU.” Naono's previous English-language releases include Yokai's Hunger and Three Wolves Mountain (published by SuBLime; rated ‘M’ for Mature Readers). To find out more about Bohra Naono, please visit her website at www.bnlyz.com.