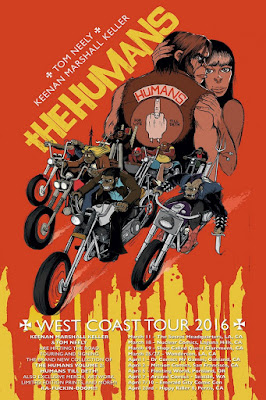 THE HUMANS RIDE OUT IN HONOR OF VOLUME 2 RELEASE

Writer Keenan Marshall Keller and artist Tom Neely will appear at comic book stores, events, and conventions this March and April to celebrate the release of the second volume in their runaway hit series: THE HUMANS, VOLUME 2: HUMANS TIL DETH.

THE HUMANS, VOLUME 2: HUMANS TIL DETH follows the gang as they rampage through drug runs with road pirates, strip club freak-outs and beatdowns, passionate sex in cheap motel rooms, and multiple bloody barroom massacres—all of which snowballs towards a brutal ending of bloody vengeance and death! It’s the feel-good hit of the year!

Keenan Marshall Keller and Tom Neely will be signing at these locations: