Freddie Mercury Returns as a Figure from Tamashii Nations 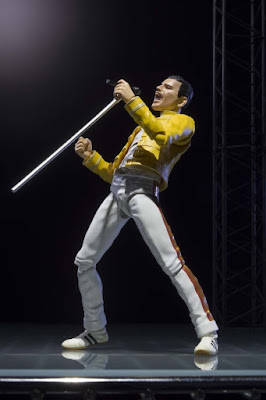 The extraordinary highly detailed figure captures the legendary performer in his iconic yellow leather jacket and will take music fans and collectors straight back in time to Queen’s famous 1986 Wembley Stadium live concert.

The Tamashii Nations S.H. Figuarts Freddie Mercury is scheduled for release in May 2016 and stands nearly 6 inches tall. The figure will carry an MSRP of $55.99 and will be available from authorized Bluefin retailers nationwide and also from a variety of leading online outlets. Pre-orders are available now.

Freddie Mercury is one of rock and roll’s greatest singers and front men. Widely known for his flamboyant style, stage moves and powerful voice, Mercury wrote and performed a variety of hit songs for Queen including “Bohemian Rhapsody,” “Crazy Little Thing Called Love,” “Don't Stop Me Now,” “Killer Queen,” “Somebody to Love,” and “We Are the Champions.” Mercury had an astounding vocal range and has been consistently voted one of the greatest singers in the history of pop and rock music.

Bluefin is the official North American distributor for Tamashii Nations, an umbrella label that encompasses Japan’s top collectible brands and features products from popular giant robot shows like Mazinger Z and Gundam, anime series like Dragon Ball and Sailor Moon, live action series like Kamen Rider and iconic sci-fi properties such as Star Wars The mission of Tamashii Nations is to bring “tamashii,” the Japanese word for soul or spirit, into everything the company creates. For a complete listing of Tamashii Nations products available from Bluefin, please visit: www.bluefincorp.com/catalog/tamashii-nations.html.


About Bluefin
Based in Irvine, CA, Bluefin built its reputation as a leading distributor of Japanese toys, collectibles, novelty and hobby products. In recent years, Bluefin has grown to include a range of high quality collectible lines from the United States, Hong Kong, Taiwan and Singapore and established itself as the official North American consumer products and retail development partner for Studio Ghibli. Selling to thousands of specialty, chain and independent stores, Bluefin is an official North American distributor for Bandai Hobby, Kotobukiya and Capcom, is the sole provider of Bandai Tamashii Nations products, and is also the exclusive and official distributor for Hero Cross, Beast Kingdom, Comicave, Mr. Hobby, SEN-TI-NEL and X-Plus. Bluefin also represents TruForce Collectibles products worldwide. Additional information is available at: www.bluefincorp.com.