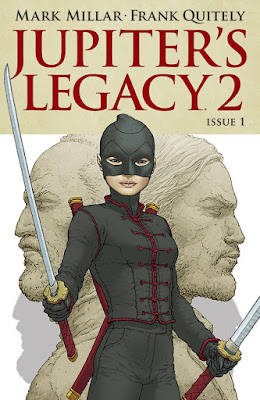 The comic book series of the century will take readers on an emotional, action-packed ride

The sequel to the industry sales-beast JUPITER'S LEGACY is back and it boasts monthly jaw-dropping, eye-popping story from bestselling creators Mark Millar (CHRONONAUTS, HUCK, Kingsman: The Secret Service) and Frank Quitely.

In JUPITER’S LEGACY, VOL. 2 #1, superhero offspring Hutch and Chloe have come out of hiding with son Jason to assemble a team of super-crooks from around the globe.

JUPITER’S LEGACY, VOL. 1 trade paperback (ISBN: 978-1632153104) collects the first story arc of the series—issues #1-5, and is available at comic book stores now. It can be re-ordered by retailers from Diamond Book Distributors with Diamond code FEB150526. It can be ordered now on Amazon, Barnes & Noble, Indiebound, and Indigo.

“Millar and Quitely have constructed a world as rich and vibrant as our own, peopled with individuals who are neither heroes nor villains.” —IGN

“It definitely lives up to the hype.” —Bloody Disgusting

“What Millar and Quitely do here, and do so well, is show us a world where superheroes exist, yet nothing is better, then invite us to consider what that says about the way we have chosen to abdicate responsibility in favor of comfort. I wish more creators were willing to push the boundaries of the genre in such a compelling way.” —Newsarama

“Elegantly written and drawn… this is a book to be proud of.” —Comic Book Resources