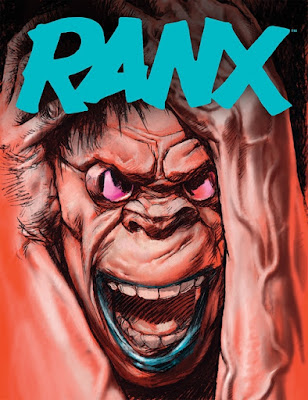 Collected for First Time in English

MILWAUKIE, OR—Dark Horse Comics is pleased to announce that it will be publishing the classic Heavy Metal series Ranx for the first time in English since its debut in the 1980s.

This volume collects all of the Ranx stories by two Italian comic masters, writer Stefano Tamburini and artist Tanino Liberatore.

Ranx (also known as RanXerox) is a sci-fi antihero made of photocopier parts and ultraviolence. In a futuristic dystopia, he protects his girlfriend Lubna from vicious drug dealers on a brutal path of sex, carnage, and destruction.

The hardcover will be released on November 9, 2016.

“Ranx is a punk, futuristic Frankenstein monster, and with the under-aged Lubna, they are a bizarre Beauty and the Beast. This artist and writer team have turned a dark mirror to the depths of our id, and we see reflected the base part of ourselves that would take what it wants with no compromise, no apology—and woe to the person who would cross us. But it is all done with a black, wry, satirical sense of humor.”—Richard Corben

“The Ranx character is a punky, post-apocalyptic android built from spare Xerox machine parts. All RanXerox stories were luxuriously illustrated with bizarre, violent and, to put it lightly, unchaste story lines.”—TwitchFilm