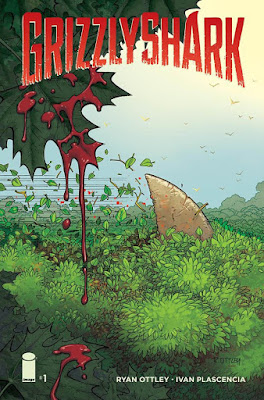 GRIZZLY SHARK IS OUT FOR BLOOD

“I am afraid of sharks so I figured the only way to overcome my fear is to make a miniseries about them,” said Ottley. “It didn't work at all. I'm never going camping again. I am really excited about this trilogy, so much fun to go in totally unfiltered and unleashed and do whatever I wanted. And all in color, so glad Ivan Plascencia could join me in this comic making adventure! The last time we saw Grizzly Shark was 2010 with a sold out one-shot, so glad fans got a kick out of that, and if you loved my issue back then, you'll love these new issues dripping with insanity.”

The sold out, black-and-white GRIZZLY SHARK issues will return, but this time in full color, and will kick off all-new issues to the series.

“My first time coloring Ryan Ottley's work and big fan of the first Grizzly Shark B/W one-shot 2010,” added Plascencia. “Two things that I admire a lot about Ryan's work are his dynamic storytelling and the way he manages to draw facial and corporal expressions. I laughed a lot on every page we worked together on this book! Definitely some of the best projects I've worked in all my career as colorist. So glad and lucky I got the chance to be part of this bloody series.”

The bloody adventures of GRIZZLY SHARK continue and invite new readers into the story of the world’s most feared animal, the Grizzly Shark.