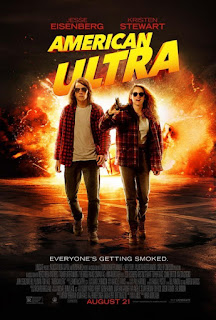 American Ultra is a 2015 action-comedy written by Max Landis and directed by Nima Nourizadeh.  The film focuses on a stoner who finds himself targeted for extermination because he is a government sleeper agent, facts of which is he unaware.

American Ultra opens in small town Liman, West Virginia where we meet Mike “Mikey” Howell (Jesse Eisenberg), a stoner and slacker.  He lives with his girlfriend, Phoebe Larson (Kristen Stewart), in a small wooden house, and he works at a convenience story.  Meanwhile, in Langley, Virginia, CIA section boss, Adrian Yates (Topher Grace), has decided Mike's fate.  Mike is the sole remaining asset of “Wiseman” which was part of the “Ultra” program, and Yates considers Mike a liability, thus targeting him for extermination.

Yates deploys a team of “Toughguy” operatives to kill Mike, but Victoria Lasseter (Connie Britton), who once supervised the Wiseman program, is determined to save Mike's life.  She arrives in Liman ahead of Yates' men, but reactivating Mike is a bit more difficult than she realized.  Mike slowly begins to remember his training, but it is a messy and chaotic process... for everyone.

American Ultra's CIA conceits are preposterous, of course.  What sells this is that the screenplay by Max Landis constructs a love that feels real and a relationship that seems genuine between Mike and Phoebe's characters.  Director Nima Nourizadeh takes the time to properly transform Landis' romantic conceit into a true-blue movie romance.  Once you buy the Mikey-Phoebe dynamic, the rest of the movie – the believable, the ridiculous, and the sublime – encourages the audience to suspend disbelief so they can enjoy one of the most inventive action-comedies of the 21st century.

Landis's script offers some interesting ideas, and Jesse Eisenberg's turn as the stoner Mikey distracts the viewer from taking a good, hard look at those ideas.  After all, the fun is in running through the world of secret and sleeper agents, not in examining what is and isn't plausible in that world.  [Of course, how many people actually take that hard look in the real world.]  Landis' concept is perfect for Eisenberg's performance, and Eisenberg's performance makes Landis' concept work perfectly.

I admire how director Nima Nourizadeh maintains the off-beat, slacker charm of this story even as the movie turns increasingly violent, but here, the gore actually has a splattery charm all its own.  In truth, Sylvester Stallone's The Expendables movie franchise could use the Nourizadeh-Landis touch.  I cannot emphasize enough that this movie is just a blast to watch, and it is fresh and imaginative in a genre, CIA-themed films, that is rapidly growing stale.

Any action-movie franchise could use some Kristen Stewart.  There is something about her that goes beyond merely being the spine of a billion-dollar movie franchise (Twilight).  Stewart is authentic in this movie, and her performance is one of the many things that come together like serendipity to make American Ultra one of the best films of 2015.