Review: "DC LEAGUE OF SUPER-PETS" is an Amusing Diversion ... for Children 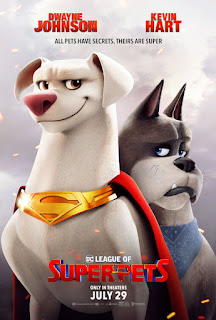 DC League of Super-Pets is a 2022 3D computer-animated, superhero fantasy and action-comedy film directed by Jared Stern with CGI animation produced by Animal Logic.  The film is based on characters and concepts appearing in comic books published by DC Comics.  DC League of Super-Pets focuses on Superman's dog and a group newly super-powered shelter animals who must stop a conspiracy hatched by a guinea pig that is an evil genius.

DC League of Super-Pets opens with the story of how baby Kal-El and a Labrador Retriever-like pup left the planet Krypton, as it was in the throes of destruction, in a space ship headed to Earth.  Decades later, the baby is now Superman/Clark Kent (John Krasinski) and his pet, Krypto the Superdog (Dwayne Johnson).  All is well between Superman and his super-best friend until Clark decides to take his relationship with Lois Lane (Olivia Wilde), a fellow reporter at “The Daily Planet,” to the next level.  Krypto suddenly feels that his relationship with Superman is threatened.

At LexCorp, Lex used guinea pigs as test subjects.  One of them, Lulu (Kate McKinnon), is also an evil genius.  She has reeled in her own piece of orange kryptonite, having discovered that it gives super-powers to animals.  Now empowered by flight and telekinesis, Lulu is determined to free the now imprisoned Lex Luthor and to destroy Superman and the Justice League.  Now, only Krypto and a ragtag band of shelter animals:  Ace a boxer dog (Kevin Hart), PB the potbellied pig (Vanessa Bayer), Merton the slider turtle (Natasha Lyonne), and Chip the squirrel (Diego Luna), are left to stop Lulu's plot and save Superman.

DC League of Super-Pets is cute, and I imagine that it may be a hit with certain young viewers.  While watching it, I couldn't wait for it to be over.  The first 56 minutes of the film is formulaic superhero movie drivel, except for a moment here and there, such as the baby Kal-El and puppy Krypto's exodus from a dying Krypton.  The film does not have another emotional moment that feels real until Kevin Hart's Ace tells his tragic story.  When the other shelter pets tell their story, those stories don't work as well as Ace's.  Also, I wasn't crazy with the design and art direction for this film.  Everything looks like second-rate retro and draw-by-number art deco.

Perhaps, I have mixed feelings about this movie because I have mixed feelings about the voice performances.  Dwayne Johnson is okay as Krypto; to me, his personality seems wrong for Krypto.  Keanu Reeves is good as Batman, mainly because he captures the humorous angle written for the character.  Kevin Hart is quite good as Ace; actually, Hart's Ace would have been a better lead character.  [Maybe, we can get an “Ace the Bat-Hound” movie.]  Kate McKinnon is also really good as Lulu, and she makes a character that probably shouldn't work dominate much of this movie.  No other voice performances in this film really move me.

The last act of DC League of Super-Pets offers a satisfying superhero battle with a victory for the heroes.  McKinnon is so good at making Lulu evil that I cheered when she receives her comeuppance.  I can recommend this movie to fans of superhero films, especially fans of films based on DC Comics characters, and to young audiences.  For the most part, it is like the average DreamWorks Animation or Illumination Entertainment anthropomorphic animal movie.  There are many superhero films that I watch repeatedly, but I doubt DC League of Super-Pets will be one of them.