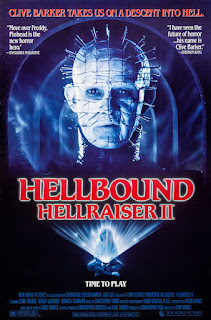 Hellbound: Hellraiser II is a 1988 British supernatural horror and dark fantasy film directed by Tony Randel.  The film is a direct sequel to the 1987 film, Hellraiser.  Like the first film, Hellbound is based on characters and concepts taken from the 1986 novella, “The Hellbound Heart,” which was written by Clive Barker, one of the people behind this film.  Hellbound is also the second film in the Hellraiser film franchise.  Hellbound finds the survivor of the first film, Kirsty, in a psychiatric hospital and dealing with a doctor who is obsessed with the sadomasochistic beings known as the “Cenobites” and the occult world from which they originate.

Hellbound: Hellraiser II opens shortly after the events of the first film.  Kirsty Cotton (Ashley Laurence) has been admitted into the Channard Institute, a psychiatric hospital.  She is still dealing with the terrible events surrounding the death of her father, Larry Cotton.  When she is interviewed by Dr. Phillip Channard (Kenneth Cranham) and his assistant, Dr. Kyle MacRae (William Hope), she gives her account of the events at her father's home (as seen in the first film).  Kirsty is shocked to discover that the bloody mattress upon which her murderous and wicked stepmother, Julia Cotton (Clare Higgins), died is in police custody, and she begs Channard and MacRae to destroy it.

What Kirsty doesn't realize is that Dr. Channard is secretly obsessed with the puzzle boxes that bring forth the Cenobites and with their occult, demonic underworld.  Taking possession of the mattress, Channard discovers that Julia is still inside it, waiting for the blood of fresh victims that will revive her.  Channard's plot involves another patient at his institute, a girl named Tiffany (Imogen Boorman).  Seemingly mute, Tiffany demonstrates an aptitude for puzzles, and Channard wants her to solve one of the three puzzle boxes that have come into his possession.

Now, Kirsty must enter the labyrinth-like world of the Cenobites because she believes that is where she can save her father.  However, both she and Tiffany will have to survive the Cenobites, Julia and Channard's schemes, and “Leviathan the Lord of the Labyrinth.”

The original Hellraiser was indeed a supernatural horror film.  Hellbound: Hellraiser II is more dark fantasy than horror.  In fact, it reminds me of a number of weird and unusual 1980s sci-fi and/or fantasy films that took readers on strange journeys, from 1981's Heavy Metal and 1983's Krull to 1985's Legend and 1986's Labyrinth.

Hellbound has good production values – not as good as Hellraiser, however.  Christopher Young, who scored the first film, provides the musical score for Hellbound, but this time, the music is a bit noisier than in the first film.  The costumes are still good, but mostly repeats the aesthetic of Hellraiser.  The make-up seems more tacky, and in some cases, needlessly gory and excessively bloody.

The story is odd, but has some interesting elements.  Unfortunately, the film does not have much of a plot, and there really isn't a beginning, middle, and end.  It is as if Hellbound is a slice of something larger.  Hellbound is more about shocking visuals and gruesome images than it is about plot.  Other than introducing the Cenobites' labyrinth-like dimension and its lord, Leviathan, the film tells us nothing in the way of details about it or its inhabitants.

The characters are intriguing, but the writer and director treat them like nothing more than bodies to be abused, tortured, and killed.  Still, I find myself fascinated by Ashley Laurence's Kirsty and newcomer Imogen Boorman's Tiffany.  In this film, I decided that Clare Higgins' Julia was more fascinating than she was in the original, although she was good in that, also.

Hellbound dimmed my enthusiasm for this franchise, and I had little patience for the next film in the series, Hellraiser III: Hell on Earth (1992).  Hellraiser wanted to tear your soul apart.  Hellbound: Hellraiser II only wants to cut your body to pieces … before the boredom sets in.

Posted by Leroy Douresseaux at 2:13 PM