Review: "Labyrinth" Gets Better with Age 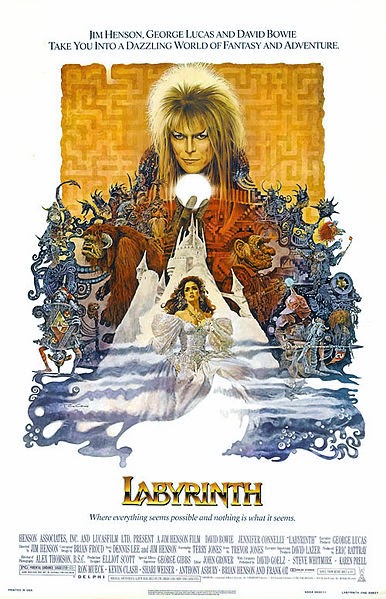 FANTASY/FAMILY with elements of adventure

The subject of this movie review is Labyrinth, a 1986 British-American fantasy film directed by the late Jim Henson.  The film was written by Terry Jones from a story by Henson and Dennis Lee, although various writers contributed without receiving screen credit, including George Lucas (who was also an executive producer of the film), Elaine May, and Laura Philips.  In the film, a teen girl wishes her baby brother away and is then forced to travel through the Goblin King’s Labyrinth in order to save the infant.

Four years after the groundbreaking film, The Dark Crystal, appeared in theatres, Labyrinth was released early in the summer of 1986.  It was the last film directed by famed puppeteer and creator of “The Muppets,” the late Jim Henson’s (1936-1990).  Met with a cool reception at the box office, Labyrinth has gone on to find a large audience on home video, where children who were born long after the film first played in theatres can watch and enjoy it.

Tired of babysitting on yet another weekend night, Sarah (Jennifer Connelly), a teenager with an active imagination who loves to envision herself in fantasy worlds, calls on the goblins from her favorite book, Labyrinth, to take her baby stepbrother, Toby (Toby Froud) away.  What she doesn’t know is that goblins do exist in another world, and they hear her plea.  They take Toby, and Sarah finds herself face to face with Jareth the Goblin King (David Bowie) in her home.  He tries to dissuade her from following him back to his world, but she realizes that she must rescue her brother.

Following Jareth, she discovers that the Labyrinth itself guards Goblin City, in the middle of which sits Jareth’s castle.  Sarah must navigate the twisted maze of deception, full of strange, kooky, and menacing characters if she is to save Toby before the end of 13 hours or he will become a permanent resident of Goblin City.  To save Toby and outwit Jareth, Sarah befriends some of the goblins to aid her on her quest.  Can Sarah and her friends save Toby in time?

Labyrinth doesn’t have The Dark Crystal’s production values, but the creature costumes, makeup, and effects are very good.  In fact, the Goblins (designed by Brian Froud, the father of Toby Froud) are some of the most vividly imaginative creatures to populate a fantasy film.  The performances are good, not great; David Bowie sings the songs he composed for the film, and the tunes have the feel of most music and songs composed for fantasy films of the 1980’s, which is to say they work well enough for the film, even if they’d sound funky on the radio.

The film seems to meander quite often; the filmmakers obviously have the kind of ideas that would fit an epic film, but not enough of them.  Thus, Labyrinth at times feels like a wandering film; the filmmakers are just biding time until the stage the final confrontation between Sarah and Jareth, but to get a full-length film, they had to stretch the middle.  In fact, Labyrinth, because of the quality of its filmmaking, would today be a TV movie.  Still, this is fun to watch just to see the Jim Henson Company’s fabulous puppetry in action – always a good enough reason to watch any Jim Henson production.