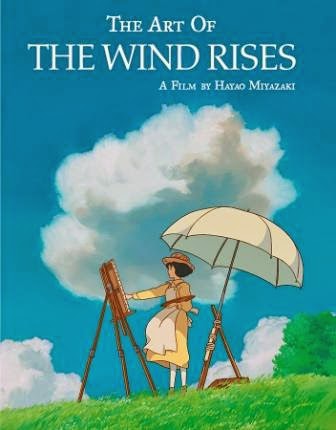 VIZ Media, LLC (VIZ Media), the largest distributor and licensor of anime and manga in North America, invites animation fans to savor the stunning artwork of The Wind Rises, Hayao Miyazaki’s widely acclaimed fictional biopic of Jiro Horikoshi, the designer of Japan’s Zero fighter plane, with the release of THE ART OF THE WIND RISES on April 8th, 2014. The brand new hardcover edition from the Studio Ghibli imprint will carry an MSRP of $34.99 U.S. / $39.99 CAN.

The Wind Rises is Miyazaki’s cinematic love letter to the power of flight and the imagination, an examination of the rise of Japan’s military might in the years leading up to the Second World War, and a call for worldwide peace and harmony in the face of destruction. The film has won numerous awards including Best Animated Film from The National Board of Review and The New York Film Critics Circle as well as Best Animated Feature from The Toronto Film Critics Association and The San Francisco Film Critics Circle, among others. THE ART OF THE WIND RISES captures the art of the film, from conception to production, and features in-depth interviews with the filmmakers.

“The Wind Rises is an epic story set during an important era in Japan’s history, and we very excited to complement Miyazaki’s landmark film with the release of this wonderfully illustrated new hardcover art book,” says Masumi Washington, Senior Editorial Director. “THE ART OF WIND RISES captures the evolution of the designs and characters that brought this captivating story to life. Join us to celebrate the work of one of the world’s most visionary animation directors with this new release from our Studio Ghibli imprint.”

THE ART OF THE WIND RISES is the newest title in VIZ Media’s acclaimed collection of full-color, hardcover Art Books based on Studio Ghibli films. Fans can also enjoy THE ART OF SPIRITED AWAY, THE ART OF HOWL’s MOVING CASTLE, THE ART OF MY NEIGHBOR TOTORO, THE ART OF NAUSICAÄ, THE ART OF PORCO ROSSO and more. VIZ Media also publishes two notable biographical memoirs of Hayao Miyazaki that feature an insightful collection of essays, interviews, memoirs, and illustrations from legendary animation director – STARTING POINT: 1979-1996, which charts Miyazaki’s early days, and TURNING POINT: 1997-2008, which examines the critical stage in the director’s career when his animated films such as Princess Mononoke, Howl’s Moving Castle, and Ponyo began to garner a significant international audience.

Hayao Miyazaki is one of Japan's most beloved animation directors. His first feature, The Castle of Cagliostro, was released in 1979. His film Nausicaä of the Valley of the Wind, based on his own manga (published domestically by VIZ Media, Rated ‘T’), was released in 1984. In 1985 Miyazaki cofounded Studio Ghibli, through which he directed the box-office smashes Princess Mononoke (1997) and Spirited Away (2001), which won the Golden Bear at the 2002 Berlin International Film Festival and the Academy Award® for Best Animated Feature Film in 2003. Howl's Moving Castle (2004) received the Osella Award for technical achievement at the 2004 Venice International Film Festival. In 2005 VIFF awarded Miyazaki the Golden Lion Award for Lifetime Achievement. His other acclaimed films include My Neighbor Totoro, Kiki's Delivery Service, and Ponyo. Miyazaki's essays, interviews, and memoirs have been collected in Starting Point: 1979-1996 and Turning Point: 1997-2008. His final film, The Wind Rises, was nominated for both a Golden Globe and Academy Award®.


Posted by Leroy Douresseaux at 4:01 PM