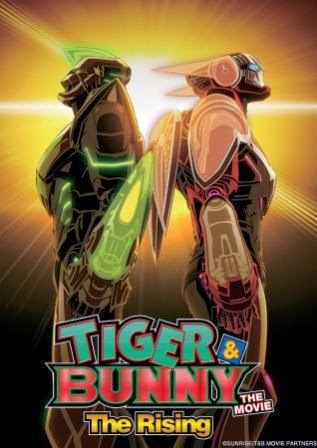 Catch Japan’s Favorite Corporately Sponsored Superheroes On The Big Screen With A New Look, New Heroes, And An Intense Battle Against A New Cast Of Powerful Villains

TIGER & BUNNY THE MOVIE: THE RISING is the second and latest feature film in the popular Japanese superhero action franchise. The film is scheduled to premiere in Japan in February prior to the theatrical premieres in 20 cities throughout the U.S. including New York, Chicago, Los Angeles, Seattle and more. Tickets will be available for $15 each, and attendees will receive a free 12” x 18” premium cardstock movie poster and while supplies last, an exclusive movie clear file. A complete list of screenings and theatre locations is available at: http://www.elevenarts.net/th_gallery/tigerandbunny-therising/

A special screening scheduled for March 22nd brings the hero-inspired big screen action of the smash hit anime property home to the Bay Area for a very special theatrical event to be held at the NEW PEOPLE Cinema, located inside the dynamic Japanese pop culture entertainment venue in San Francisco’s Japantown at 1746 Post St. Details for this screening will be announced soon on the TIGER & BUNNY Facebook page at: https://www.facebook.com/TigerAndBunny.

In TIGER & BUNNY THE MOVIE: THE RISING, the heroes are back in an all-new feature-length film! Kotetsu T. Kaburagi, a.k.a. Wild Tiger, and Barnaby Brooks Jr.’s partnership comes to a sudden end when Apollon Media’s new owner Mark Schneider fires Kotetsu and moves Barnaby back into the First League, pairing him up with Golden Ryan, a new hero with awesome powers and a huge ego to match. When the heroes are sent to investigate a string of strange incidents tied closely to the city’s Goddess Legend, they discover three superpowered NEXTs plotting to bring terror and destruction to Stern Bild.

“TIGER & BUNNY THE MOVIE: THE RISING is the all-new feature film in the smash hit series, and this time the tables are turned as it becomes Barnaby Brooks Jr., aka Bunny, who now has to work with a young and arrogant upstart,” says Charlene Ingram, Senior Marketing Manager, Animation. “Barnaby is more mature now, honoring and passing on the values he learned from his former partner. And though the beloved Wild Tiger is no longer partnered with Barnaby, he’ll also get his fair share of action. Don’t miss the big screen superhero action and drama as TIGER & BUNNY THE MOVIE: THE RISING premieres in North America!”

VIZ Media is the also distributor of the TIGER & BUNNY manga series (rated ‘T’ for Teens), which features artwork by Mizuki Sakakibara and is based on the smash hit animated series, created by the famed Tokyo-based anime studio Sunrise. VIZ Media also licenses and distributes the popular TIGER & BUNNY feature film and anime series that are available on DVD/Blu-ray as well as on the company’s Neon Alley 24/7 anime channel.

More information on the TIGER & BUNNY anime is available at: www.facebook.com/TigerAndBunny and VIZAnime.com/tiger-and-bunny/


Posted by Leroy Douresseaux at 10:06 AM