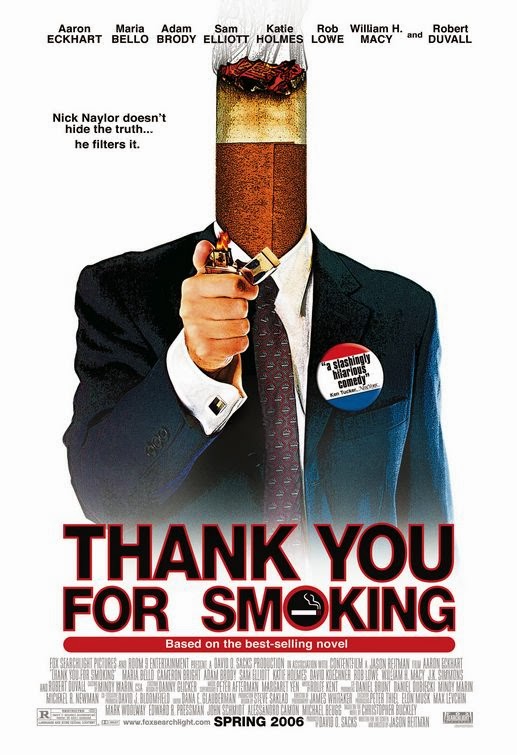 The subject of this movie review is Thank You for Smoking, a 2005 satirical comedy written for the screen and directed by Jason Reitman.  The film is based on the 1994 novel, Thank You for Smoking, by author Christopher Buckley.  Thank You for Smoking the movie follows the tobacco industry’s chief spokesman as he spins and disseminates information on behalf of cigarettes, while trying to remain a role model for his twelve-year-old son.

As Vice-President of the Academy of Tobacco Studies, Nick Naylor (Aaron Eckhart) is the main lobbyist and primary spin doctor for Big Tobacco.  Naylor is on a mission to make the country forget the dangers and health risks of smoking cigarettes.  However, his mission gets tougher with health advocates and the opportunistic Senator Ortolan K. Finistirre (William H. Macy) determined to put a new poison label (in the form of an image of the skull & bones) on cigarette packs.  Naylor goes on the PR offensive with a strategy to get big Hollywood actors to smoke on screen, as the movie stars of yesteryear did in the Golden Age of Hollywood movies.  Nick enlists, Jeff Megall (Rob Lowe), a Hollywood super-agent, to help him get smoking on screen again.

However, Nicky’s newfound notoriety does not go unnoticed by Big Tobacco’s head honcho, The Captain (Robert Duvall), who gives his blessing to Nick’s Hollywood plan.  Nick’s activities also get the attention of a beautiful, young investigative reporter, Heather Halloway (Katie Holmes), who is willing to use her body to get Nick to tell her his secrets.  Even with a busy schedule, Nick still finds time to hold forth with two comrades – two other lobbyists for industries also facing public backlash: Polly Bailey (Maria Bello) of the alcohol industry and Bobby Jay Bliss (David Koechner) of the gun industry.  Together, the three of them are the Merchants of Death or M.O.D. Squad.  Nick’s also a father, and he’s trying to remain a role model to his young, impressionable son, Joey Naylor (Cameron Bright), who thinks his dad is a god, but Nick’s ex-wife, Jill Naylor (Kim Dickens), isn’t sure a tobacco lobbyist is the best dad material.

Jason Reitman, the son of famed comedy director, Ivan Reitman (Animal House, Ghostbusters), has a more cerebral approach to film comedy than his father, and that’s clearly evident in the clever, offhand satire, Thank You for Smoking, which Reitman adapted from the novel by Christopher Buckley.  The film comes across as a savage satire of the tobacco industry, but Reitman directs the film with such elegance that Thank You for Smoking sometimes comes across as glib and soulless.  In his attempt to impale Big Tobacco, and also throw sand in the face of shallow Hollywood, opportunistic big media, and shameless Congress, Reitman’s movie ends up gabby and has no real villains.  This is a satire that comes across as if it’s teasing its targets rather than criticizing them.

While Thank You for Smoking holds up the characters and subject matter for detached scrutiny, the cast isn’t afraid to get down and dirty.  The actors take delight in revealing the characters for all their oily selfishness.  They’re all out for their own interests, and what little guilt they feel merely adds a light pungent flavor to the characters.  The best performance is delivered, of course, by Aaron Eckhart as the film’s protagonist/quasi-villain, Nick Naylor.  A character actor who can play an amazing range of lead characters, Eckhart gives Thank You for Smoking its gift of gab.  Eckhart’s screen chemistry with Cameron Bright, the young actor who plays Nick’s son, Joey, is supernaturally real.  It’s like a real father and son duo.

Eckhart humanizes Naylor, and makes the viewer like him and want to engage him.  Thank You for Smoking is well-written and well-directed (considering the inexperience of the director), and the technical aspects are pretty good.  But it’s Aaron Eckhart who makes Thank You for Smoking something more than just another satirical film essay.  He makes it memorable.


Posted by Leroy Douresseaux at 9:40 AM