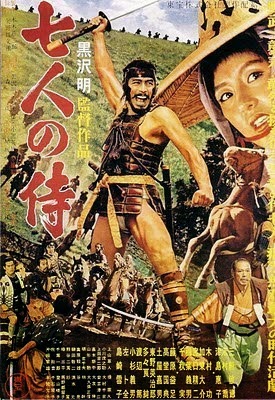 The subject of this movie review is Seven Samurai (original Japanese title: Shichinin no samurai), a 1954 samurai drama and period adventure film from director Akira Kurosawa.  Set during Japan’s Sengoku period (warring states period), the film focuses on a poor village, the bandits that attack the village, and the seven unemployed samurai that the villagers recruit to help defend themselves.

Not only do I consider Seven Samurai to be one of the ten best films every made, but I also love it as one of my all-time favorite movies.  I was surprised to learn that the film is believed to have contributed structural narrative innovations to film storytelling or was among the first to use those innovations.  That’s great, but I don’t need that information on innovations to know that Kurosawa’s film overwhelms me.

Late 16th century, Japan:  a small farming village finds itself annually besieged by bandits, who usually arrive just after harvest so that they can steal the villagers’ crops.  Tired of being beaten into starvation, a small group of farmers leaves the village and heads for a town in hopes of convincing a large number of samurai to defend their village from the encroaching bandits.  The farmers happen upon a scene wherein a master samurai, Kambei (Takashi Shimura), disguises himself as a monk in order to save a child kidnapped by a madman.

Impressed by his bravery, the villagers convince Kambei to help their village, although the only payment that the farmers can offer the samurai is enough rice to eat.  Kambei and the farmers make the same offer to a number of samurai, many of whom are greatly insulted by the offer.  However, six others eventually accept, including a scruffy ronin (Toshirô Mifune) and a novice samurai.  The seven samurai and the farmers return to the village, where together they build the rest of the villagers into a militia, while the bandits lurk in the nearby forest.  Eventually, the bandits’ raids on the village begin, and it culminates in an epic, bloody battle pitting the samurai and villagers against the bandits.

Akira Kurosawa’s Seven Samurai is one of the ultimate auteur films, coming from a director, who like Stanley Kubrick, is an ultimate auteur.  It’s hard to believe that there is anything on the screen that Kurosawa didn’t want, and everything is so carefully considered:  the composition of scenes, the cinematographer, the execution of the action, the editing, the lighting, etc.  The film filled my senses, controlled my emotions, and had my mind on overdrive as I tried to figure out the next move, the next scene, or the narrative flow.  I have found very few films to so move me with such power, exhilaration, fear, anticipation, and Seven Samurai even has a few laughs.

If you’re looking for flying, super powered samurai, this isn’t it.  If you want an epic film about honor, sacrifice, and duty set in a romantic past, Seven Samurai is it.  This is easily one of the ten best motion pictures ever made.