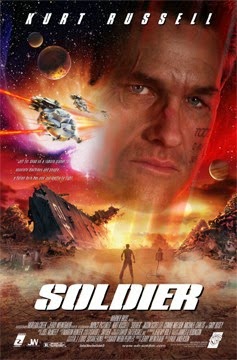 SCI-FI/ACTION with elements of a thriller

The subject of this movie review is Soldier, a 1998 science fiction and action film from director Paul W.S. Anderson.  The film focuses on a discarded soldier who defends crash survivors on a waste disposal planet from the genetically-engineered soldiers ordered to eliminate them.

At the beginning of director Paul Anderson and writer David Webb Peoples’s sci-fi action film, Soldier, the military industrial complex chooses it soldiers from the cradle, from where they are taken and turned into barely human killing machines.  The best of the lot is Todd 3465 (Kurt Russell).  Todd 3465 or Sergeant Todd is an efficient, effective soldier who does nothing but follow orders to the letter.  [This is funny now, but at the time of this film’s release, I thought that Russell seemed to be one of a relatively small number of Hollywood actors who could convincingly play a heterosexual man a/k/a “a real man.”)

After one of his genetically engineered replacements defeats him and leaves him for dead, the military dumps Todd’s body on a remote planetoid, Arcadia 234.  There, Todd encounters a peaceful community of castaways who teach him about a life without the destruction of war.  Later, Todd’s super-soldier replacements arrive on the planet for military exercises.  Now, Todd must take up the colonists’ defense, after the soldiers are ordered to kill the settlers.

While Peoples’s script hints at multiple layers and subtexts, Anderson’s direction is too busy to bother with stories and ideas.  Peoples, the writer of Blade Runner and Unforgiven, is an excellent screenwriter, but his vision is often supplanted by the director’s goals.  Ridley Scott unleashed a visual feast with Blade Runner, while delivering Peoples’s ideas through pictures rather than spoken words.  Clint Eastwood’s Unforgiven was a kind of apology to his gunfighter pictures, but he managed to deliver his sermon by mostly keeping Peoples’s work intact.

Anderson (Mortal Kombat and Event Horizon), at the precipice of being a hack or a halfway decent director-for-hire, looses Peoples in a series of standard action film clichés and direction-by-numbers staging.  Still, Peoples basic story is so strong that it shines through even the bad shots like those that have Russell standing in the foreground while explosions in the background tear the world apart.  Russell, however, doesn’t get the directorial shaft like his co-stars do.

Caine 607 (Jason Scott Lee, Dragon: the Bruce Lee Story), Todd’s genetically engineered opposite, is ripe for metaphoric play as Todd’s counterpart.  His screen time barely registers; our only solace for how good the Todd/Caine dynamic might have been is their end battle.  Sandra (Connie Nielsen, Gladiator), a beautiful colonist who draws Todd’s stares, is lost in the haze of soft lens shots.  She is certainly beautiful, and Anderson never lets us forget that.  He traps Sandra in a snow globe; he softly lights every close-up of her and turns her into a porcelain doll.  She seems like a good character, but this is an action movie and we can’t be bothered with girls’ stories.

What really carries the movie is the mostly silently relationship between Todd and Sandra’s small son, Nathan (Jared Thorne).  Todd rarely speaks, and when he does, it’s mostly “yes’s” and “sir’s.”  It was the way he was both reared and trained, an unquestioning soldier who silently went about his brutal duty.  Nathan cannot speak because of a serpent’s bite.  His placid face is silent, and the only thing one can read from his piercing gaze is need.  Nathan needs Todd to protect him, and Todd needs Nathan to help him to gain some measure of being a human.  Todd can learn to defend Nathan both as a soldier and as a father, while Nathan can learn to defend himself, yet remain a peaceful human.

Russell is boyish as Todd, and he never lets Todd lose the boy that learned to be a killing machine; watching Russell’s stone face is also like watching the boy Todd through the shadows that linger on Todd’s face.  Russell’s cinematic presence speaks loud volumes of his character; the story is in him, and the audience must ever watch him to learn it.  Russell built his body solidly and strongly, eschewing the artificiality of bodybuilding.  It gives him an earthy ruggedness that hints at a man of base origins.  His facial expressions mirror the youthfulness of Nathan’s face and makes them counterparts.  Nathan is Todd, a blank slate ready to mold as Todd was, and perhaps it is Todd who will mold him, but not with the brutality with which the military molded him.

There is much to the Todd/Nathan relationship, as there is to this entire movie.  However, Anderson, like the serpent that stole Nathan’s speech and like the military machines strangled Todd’s voice, silences this movie with a heavy handiness that reveals someone determined bring a product to the market and not a story to the audience.

It is a testament to Russell’s star presence and acting ability that this movie is still worth watching.


Posted by Leroy Douresseaux at 7:51 AM