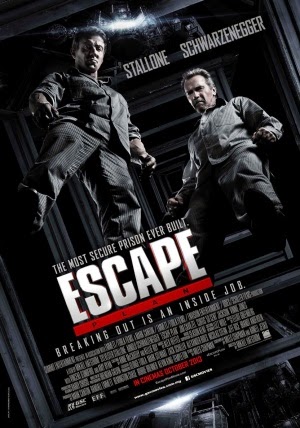 Escape Plan is a 2013 action movie from director Mikael Håfström.  The film stars Sylvester Stallone and Arnold Schwarzenegger in a tale about a structural-security engineer incarcerated in the world’s most secret and secure prison and the escape plan he concocts with a fellow inmate.

Escape Plan opens in Bendwater Federal Penitentiary and introduces Ray Breslin (Sylvester Stallone).  Breslin seems to be prisoner, but actually, he specializes in breaking out of maximum security prisons in order to test their reliability.  With his partner, Lester Clark (Vincent D’Onofrio), Breslin owns the Los Angeles-based, independent security company, B&C Security, where Breslin studies, researches, and writes about prisons.

Breslin and Clark’s latest client is CIA Agent Jessica Mayer (Caitriona Balfe).  Mayer offers Breslin double his free to break out of the International Detainee Unit, a top-secret prison where the world’s most dangerous criminals and terrorists are held, in order to see if it is really escape-proof.  Breslin takes the identity of a Spanish terrorist named “Anthony Portos,” and prepares to be taken into custody.

The plan goes awry, and Breslin awakens in a glass cell located in a complex full of glass cells.  Warden Willard Hobbes (Jim Caviezel) seems delighted to have “Portos” in his prison.  Fellow inmate, Emil Rottmayer (Arnold Schwarzenegger), seems too eager to get to know him.  Now, Breslin must use all his skills to escape, but this prison seems designed to foil his every move.

If you have to see an action movie, Escape Plan will do.  The first half of the film is a nearly unwatchable bore, but the second half of the film is entertaining.  The plot is stretched past the point of credulity in order for the resolution to make sense.

Escape Plan is a pale imitation of Sylvester Stallone and Arnold Schwarzenegger’s 1980s mindless flicks.  From the mid-1980s to the early 1990s, Escape Plan would have been considered a cutting edge techno-thriller; now it’s a shame to see two such venerable stars in such a movie.  Actually, it would make sense for this to be a modern Steven Seagal or even a Jean-Claude Van Damme straight-to-DVD movie.  I must note that Schwarzenegger still looks good, but Stallone’s face is a post-op, plastic surgery wreck.

On the other hand, these two old action movie dogs can still deliver some of what we expect of them.  Escape Plan gives plenty of Stallone brawling, and, in the movie’s last act, we get Schwarzenegger in a classic pose as he fires an automatic weapon, in a way that references him in The Terminator franchise.  I did not ask much of this movie, and thanks to a clunky, listless first half, I almost did get what little I expected.  I will say this:  Escape Plan actually could have been better, so I would like to see Stallone and Schwarzenegger team-up again.


Posted by Leroy Douresseaux at 7:03 AM