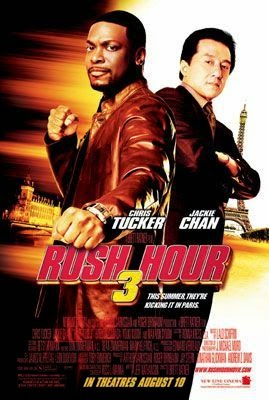 The subject of this movie review is Rush Hour 3, a 2007 action movie and crime comedy from director Brett Ratner.  It is the third film in the Rush Hour movie franchise.  In Rush Hour 3, Lee and Carter head to Paris, after an attempted assassination on an ambassador, to protect a French woman with knowledge about the Triads’ secret leaders.

Jackie Chan and Chris Tucker return for the long-awaited third installment of their wildly popular comic action film franchise, Rush Hour.  While Rush Hour 3 is funny and action-packed, the stars and director seem to be trying too hard.

After his dear friend, Ambassador Han (Tzi Ma), is shot, Hong Kong Police Chief Inspector Lee (Jackie Chan) finds himself guarding Han’s daughter, Soo Yung (Jingchu Zhang), from the Triads who want Han and the information he has on them destroyed.  There is, however, another complication when Lee discovers that Kenji (Hiroyuki Sanada), someone from his past who is greatly important to him, suddenly appears and is associated with the Triads.

LAPD Detective James Carter (Chris Tucker) leaves the doghouse of traffic detail to help his old friend, Lee.  Soon, the duo is in Paris looking for two elusive women, the sexy Geneviéve (Noémie Lenoir) and the mysterious “Shy Shen,” who may hold the secrets that the Triads guard so jealously.  But in Paris, Lee and Carter are out of their element and always in trouble and/or danger.

Rush Hour 3 has its moments – in fact, plenty of them, but there seem to be an equal number of times in which the pratfalls, explosions, gunfire, banter, sex, etc. seem forced.  The sad thing is that neither director Brett Ratner nor his two stars need to be so over the top.  With two strong comic actors – Lee being the great physical comedian and Tucker personifying the fast-talking streetwise comic – the Rush Hour franchise has the perfect opposites-attract pair.  It’s not that hard to build an action comedy around them with only the thinnest scenario.

Instead, Chris Tucker’s witty banter often turns to babbling, and Jackie Chan’s fighting and gymnastic scenes usually make him look like a tired windup toy or a beat-up action figure caught in a wind tunnel.  It is okay to refry the same old shtick; Ratner and writer Jeff Nathanson just overcooked it and let some of the fun get scorched.  Still, seeing Chan and Tucker back together is good, and the movie is not exactly bad.  In fact, Rush Hour 3 is good enough to make a fourth film worth the wait.


Posted by Leroy Douresseaux at 3:41 PM