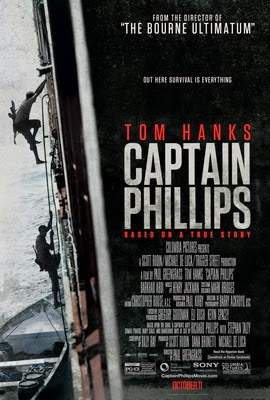 Captain Phillips is a 2013 thriller and drama from director Paul Greengrass.  The film is an adaptation of A Captain's Duty: Somali Pirates, Navy SEALS, and Dangerous Days at Sea by Richard Phillips and Stephan Talty.  The movie dramatizes the 2009 hijacking of the US-flagged MV Maersk Alabama by Somali pirates, the first American cargo ship to be hijacked in two hundred years.  Academy Award-winning actor Kevin Spacey is one of the film’s executive producers.

The film begins with Captain Richard “Rich” Phillips (Tom Hanks) taking command of the MV Maersk Alabama.  This unarmed container ship is scheduled to sail from the Port of Salalah (in the city of Salalah, Oman) through the Gulf of Aden to Mombasa, Kenya.  After an alert concerning pirate activity around the Horn of Africa, Captain Phillips orders strict security precautions on the vessel and carries out practice drills.  In fact, during those drills, two skiffs containing Somali pirates chase the Alabama.

One group of pirates is eventually successful and actually boards and takes control of the Alabama.  The skiff’s captain, Abduwali Muse (Barkhad Abdi), and his cohorts:  Adan Bilal (Barkhad Abdirahman), Walid Elmi (Mahat M. Ali), and Nour Najee (Faysal Ahmed), plan to ransom the ship and its crew for millions of dollars.  Captain Phillips has called for help, but can he stall the pirates before they start killing his crew?

Audiences can practically always count on director Paul Greengrass to deliver a riveting film and an edge-of-your-seat thriller with each of his movies.  Greengrass’ films aren’t the average run-of-the-mill action thrillers; they’re smart and filled with strong characters facing real-world dilemmas.  Captain Phillips is Greengrass’ best film since his Jason Bourne movies.  Greengrass gets a championship effort from his editor Christopher Rouse, who delivers a film that gets better and better, more engaging, more entrancing with each minute.

Although, Tom Hanks is the star and Rich Phillips is the title character and focus, in some way, Captain Phillips is also about Abduwali Muse.  First-time actor, Barkhad Abdi, delivers a superb performance.  Abdi’s acting is especially impressive as the film only focuses on Muse’s personality in the context of what comes out of his actions.  Since Muse does not get to show himself as a fully-developed human, Abdi has to sell him as a three-dimensional villain who only reveals his intentions (getting a ransom), and little beyond that.  I can see why Abdi earned such acclaim and an Oscar nomination to go with a BAFTA win as best supporting actor.

This is pretty much the same with Captain Phillips.  His motivation, conflicts, and dilemmas are seen only in the context of him being a captain of a ship and also a captain of a ship that is under duress.  Tom Hanks is known for playing characters that are totally or mostly open to the audience.  As Phillips, Hanks erects a wall that makes it only easy to feel sympathy, pity, and fear for Phillips.  However, Hanks is so good that he still manages to deliver some fantastic acting – something that is more performance art than it is performance of a character.

All of Captain Phillips is good, but the last forty minutes are a doozy.  The rescue operation makes a very good film a truly exceptional film.  I wish more thrillers were like Captain Phillips.


Posted by Leroy Douresseaux at 7:22 AM