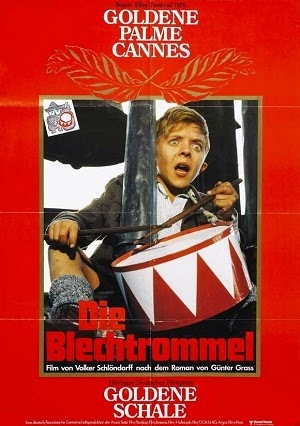 The subject of this movie review is The Tin Drum (original title: Die Blechtrommel), a 1979 West German drama and black comedy from director Volker Schlöndorff.  The film is an adaptation of the 1959 novel, The Tin Drum, written by author, Günter Grass, which is the first book in Grass’ Danzig Trilogy.  The Tin Drum the movie follows a most unusual boy who, on his third birthday, decides not to grow up.

The 1979 West German film Die Blechtrommel won the 1980 Academy Award for “Best Foreign Language Film.”  It is the story of Oskar Matzerath (David Bennent), a young boy in 1930’s Danzig, Germany who decides to stop growing at the age of three.  Oskar carries a small tin drum around his neck that he beats often, much to the chagrin of the adults, and Oskar has the unique physical gift of being able to scream at such a high pitch that he can break glass.

Although Oskar’s body stops growing, mentally and psychologically he keeps aging, and as he grows he witnesses the rise of Nazism and the beginning and the end of World War II.  With everything going on around him, however, Oskar’s world revolves around pleasing himself.  Despite Oskar’s self-centeredness, the film also examines the chaotic and tumultuous lives of the adults around him, especially his mother, Agnes (Angela Winkler), and his mothers two lovers, a German shopkeeper named Alfred (Mario Adorf) and Jan Bronski (Daniel Olbrychski), a handsome Polish man who works at a Polish post office in Danzig, either of whom could be Oskar’s biological father.

Many consider The Tin Drum to be one of the great films to come out of West Germany in the last quarter century.  The film, however, isn’t one of those beautiful and genteel foreign films or one of those French films shot to mimic the immediacy of realism.  The Tin Drum is an unflinching and dense psychological examination of people caught in complicated relationships who also have to navigate the narrow straights of their own interior lives.  It’s also a sweeping cinematic observation of Nazi Germany that unfurls its ideas simultaneously through symbolism and blunt literalism.  Like some glossy, Hollywood eye candy flick, The Tin Drum doesn’t allow the audience to look away; it’s like watching a miraculous apparition unfurl before one’s eyes or like watching a mesmerizing accident.

The focus of the story is, of course, Oskar, who is mostly not likeable.  In fact, there’s something menacing or even evil about him.  He seeks to shut himself off from the world or at least totally funnel existence through his wants, but what’s most fascinating is watching Oskar’s life grow (his personality doesn’t change) with the rise of Nazism.


Posted by Leroy Douresseaux at 6:40 AM