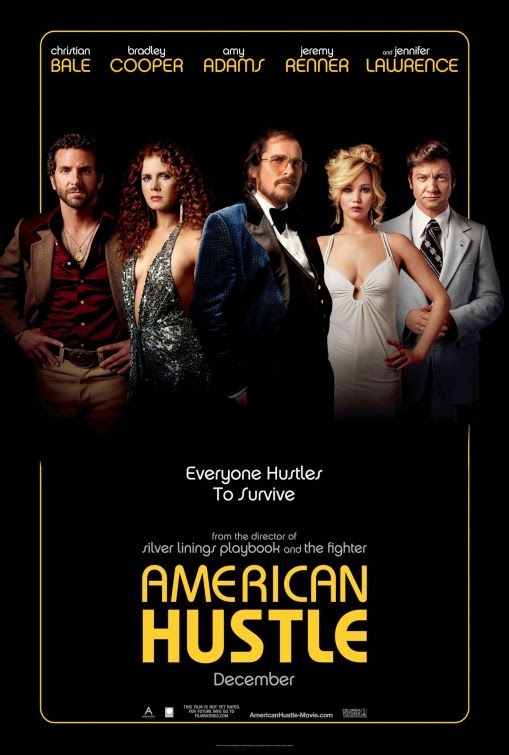 American Hustle is a 2013 historical comedic drama from director David O. Russell.  The film focuses on a con man and his seductive partner, both forced to work for an eccentric FBI agent, who forces them to help expose political corruption.

American Hustle opens in 1978 and introduces Irving Rosenfeld (Christian Bale), a successful conman.  While attending a friend’s party, Irving meets Sydney Prosser (Amy Adams), a woman whose beauty and intelligence attracts him, and he falls hard for her.  Surprisingly, Sydney is excited about becoming Irving’s partner in his con jobs, and she takes on the identity of Lady Edith Greensly to assist Irving in tricking prospective marks/victims in their schemes.

They eventually attract the unwanted attention of a wild and odd FBI agent, Richard “Richie” DiMaso (Bradley Cooper).  Richie forces Irving and Sydney into helping him in a sting operation to expose corruption among several members of Congress in New Jersey and Pennsylvania.  Irving does not trust Richie, especially because the G-Man flirts with Sydney.  Irving’s young wife, Rosalyn (Jennifer Lawrence), isn’t too crazy about any of what they are doing and plots to play a part in a dangerous game of backstabbers, crooked politicians, and mobsters.

American Hustle is a fictional version of the Abscam (or ABSCAM) scandal of the late 1970s and early 1980s.  Abscam was a Federal Bureau of Investigation (FBI) sting operation in which the Bureau was aided by a convicted con-man in videotaping politicians.  These politicians were offered bribes by a fake Middle Eastern sheik in return for various political favors, which some accepted.  The investigation ultimately led to several people being convicted, including members of Congress and elected officials in both New Jersey and Philadelphia.

And you don’t need to know that to enjoy American Hustle.  I barely remember Abscam, and I probably wouldn’t, if not for the name (a codename which combined the words “Arab” and “scam”).  It is no scam that co-writer and director David O. Russell has once again delivered a film with an ensemble cast that is just plain good.  I won’t go into the details, except to say that the five main stars:  Christian Bale, Bradley Cooper, Amy Adams, Jeremy Renner, and Jennifer Lawrence are every bit as good as you have probably heard and certainly deserve the awards, nominations, and accolades they received.  It’s true.  Jennifer Lawrence is not a fluke; she’s the real deal.

Audiences that like good acting and like to see superb actors come together to love and hate, to support and challenge, and plays scenes together will want to hustle up a way to see American Hustle – immediately.  Spoiler alert:  Robert De Niro makes a cameo in American Hustle as the mobster, Victor Tellegio, but he does not receive a screen credit.  Of course, De Niro is good.  He exudes such murderous intentions as Tellegio that I almost ran away from my television set the first time he appeared on screen.

As I also said of Silver Linings Playbook, American Hustle is a great movie, and I want to see it again.


Posted by Leroy Douresseaux at 6:16 AM