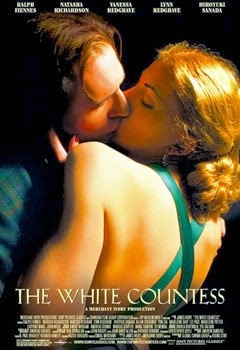 DRAMA/HISTORICAL with elements of romance

The subject of this movie review is The White Countess, a 2005 period drama from director James Ivory and producer Ismail Merchant for their Merchant Ivory Productions.  This is the last film produced by Merchant, who died during production of the film.  Written by Kazuo Ishiguro, The White Countess is set in 1930s Shanghai and focuses on a blind American diplomat and a young Russian trying to support members of her dead husband’s aristocratic family.

A traumatic political event took the lives of both his wife and son, and a second one killed his daughter and blinded him.  Now, 40-something, disenchanted, ex-U.S. diplomat Todd Jackson (Ralph Fiennes) lives a lonely life amid the political turmoil of 1930’s Shanghai, and dreams of owning a gentleman’s club – the kind that he can still see in his mind and quite unlike the hotels and clubs in which he currently languishes.

However, his life changes when he crosses paths with Countess Sofia Belinskya (Natasha Richardson), a widowed Russian countess living in impoverished exile with her in-laws and her daughter.  Where once she lived the life of nobility, now, she accepts sordid jobs to support her family.  When fortune strikes and gives Jackson the means to open his bar, he names it The White Countess, and convinces Sofia to accept a job as the club’s hostess.  But will he have the strength to admit his love before a coming Japanese invasion of Shanghai separates them forever?

The team of director James Ivory and producer Ismail Merchant are known to the film world as Merchant Ivory Productions and have produced such Oscar-winning and Oscar-nominated films as A Room with a View, Howard’s End, and Remains of the Day.  The Indian born Merchant (who also directed films) died in May of 2005, and The White Countess was his final collaboration with James Ivory.  The film is quiet and lacks the grandeur of the better-known Merchant Ivory Production like Howard’s End.  It’s very low key, and dialogue moves the narrative.  It’s almost as if The White Countess is more a historical epic made for television than it is a work for the cinema.

Ralph Fiennes and Natasha Richardson give strange, quiet performances.  Fiennes is as usual quite good, and Richardson is mysterious and detached.  One would think that the two couldn’t have any chemistry, but their facial expressions and subtle physical movements give their characters and their relationship a deeply evocative tone.  They essentially define this slow moving, but classy period piece, as all the other actors seem to follow their tranquil acting.

In fact, there are a number of fine supporting performances including a rare appearance in the same film by famous acting sisters, Vanessa Redgrave and Lynn Redgrave (real life mother and aunt respectively of Natasha Richardson), in small but well-done roles.  Hiroyuki Sanada gives an excellent turn as the mysterious Mr. Matsuda, who establishes the film’s exotic, but politically volatile setting, 1930’s Shanghai.  The White Countess may seem overly serene at times, but the impeccable cast makes it a good choice for fans of fine acting and Merchant Ivory films.


Posted by Leroy Douresseaux at 8:10 AM