Review: "Superman: Unbound" is Quite Unsound 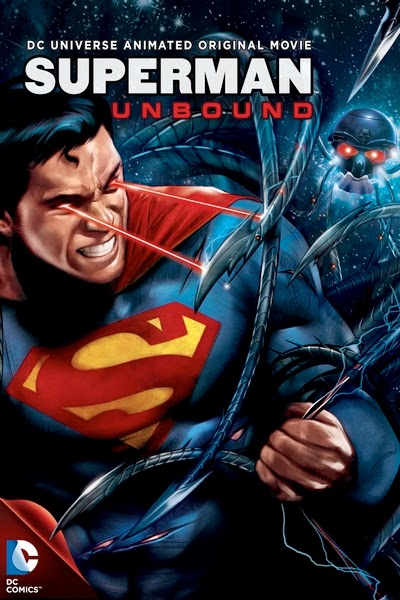 Superman: Unbound is an adaptation of the comic book story arc, “Superman: Braniac,” which was published in Action Comics #866-870 (cover date: August 2008 to December 2008).  The story was written by Geoff Johns and drawn by artist Gary Frank.  In Superman: Unbound, Superman and Supergirl take on a powerful cyborg that collects cities and destroys worlds

Superman: Unbound finds Kara Zor-El AKA Supergirl (Molly Quinn) trying to find her place on Earth.  Like her cousin, Clark Kent AKA Superman (Matt Bomer), she is from the planet Krypton, but she has more traumatic memories involving the destroyed world than her cousin does.  She remembers how a space-faring cyborg, called Brainiac (John Noble), attacked Krypton and stole the city of Kandor.  Now, Brainiac has set his sights on Earth.  Superman is ready to battle the monster, but can Supergirl overcome her trauma in order to fight a villain she very much fears?

Superman: Unbound is not a tie-in to The Man of Steel, the 2013 live-action reboot of the Superman film franchise.  However, both films depict Superman’s home world of Krypton in distress.  Both are also mediocre action movies that feature overly long sequences of destruction and battles.  The Man of Steel was a tedious excursion into the Superman mythos.  Superman: Unbound uses the Superman mythos as window-dressing for a story that is just an excuse for super-powered beings to bash and thrash.

It is pointless to even go into detail about the subplot concerning Clark Kent and Lois Lane’s (Stana Katic) relationship dysfunction.  It’s lame.  I hate that I wasted time watching this.  I can’t even explain why I thought that I should watch it.  Well, I am a longtime comic book fan, and I have watched the other DC Universe Animated Original Movies released prior to this one.  Superman: Unbound:  it’s hard to find moments in it that I liked.


Posted by Leroy Douresseaux at 7:34 AM